The Benefits of Gearboxes — and When to Pick Integrated Gearmotors

Submitted on Thu, 03/05/2020
Only about one-third of motor-driven motion systems use gearing, even though gearheads benefit size-constrained applications and those running at 1,000 rpm or less. Other advantages of using a gearhead with a servomotor abound. 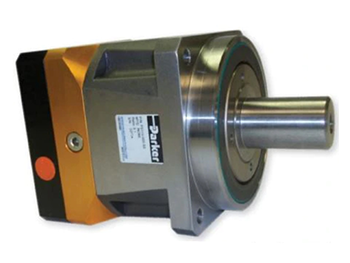 Torque Multiplication: Gearheads provide a mechanical advantage when mounted to the motor output shaft. The number of gears, and the number of teeth on each, create a mechanical advantage defined by a ratio. If a motor generates 100 lb-in. of torque, attaching a 5:1 gearhead generates output torque approaching 500lb-in. depending on gearhead efficiency.

Speed Reduction: Gearheads are often called gear reducers because most increase output torque while decreasing output speed. A motor running at 1,000 rpm fitted with a 5:1 ratio gearhead outputs 200 rpm. This speed reduction improves system performance because many motors do not operate efficiently at low rpm.

Consider a stone-grinding mechanism that must run at 15rpm. At this speed, motor cogging makes grindingwheel rotation inconsistent. The variable resistance of the stone being ground also renders wheel rotation unpredictable. In contrast, fitting a 100:1 gearhead to the motor lets the latter run at 1,500 rpm. The motor-gear-head combination provides more-consistent output force and smooth wheel rotation despite friction and load variations.

Inertia Matching: Over the past 20 years, servomotor manufacturers have introduced lightweight materials, dense copper windings, and high-energy magnets for motors that generate more torque for a given frame size. While beneficial, this trend has increased the risk of inertial mismatches between servomotors and the loads they control.

Should load inertia significantly exceed that of the motor, it causes excessive overshoot or increased settling times — both of which decrease production line throughput. On the other hand, a motor too large for an application has a high initial cost and consumes more power to accelerate its own inertia.

Here, a gearhead can help match motor inertia to load inertia, resulting in a more-responsive system. The motor experiences reflected inertia equal to the load inertia divided by the square of the gearhead ratio. Rapid startand- stop applications benefit most from wellmatched motor and load inertias. 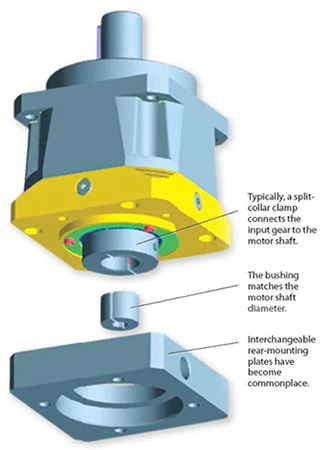 Cost Savings: Using a gearhead to multiply torque, reduce speed, and match inertia also helps cut system cost by permitting smaller motors and drives. Consider an application requiring 200‚lb-in. at 300‚rpm. Driving this load with a servomotor alone (assuming industry-standard performance characteristics) necessitates a 142-mm frame size and a drive supplying 30‚A continuous. Such a system costs about $6,000. In contrast, including a gearhead cuts motor and gearhead frame size to 90‚mm — and the resulting mechanical advantage permits a smaller drive as well. Such a system costs about $3,300.

Configuration Options
If a gearhead makes sense, an engineer must determine whether in-line or right-angle gearing is appropriate for the design’s footprint. Next, one must decide between an integrated gearmotor or a more-common gearhead-motor pair.


Another consideration is whether to use a separate gearhead assembly or an assembly that is built into the motor. Most motion designs incorporating gearing use separate assemblies. This lets engineers specify the best motor and gearhead for an application, even if they’re from different manufacturers. Typical gearheads can be mounted to just about any servomotor through flanges and standard screws. A splitcollar mechanism on the input gear secures it to the motor shaft. This configuration is more flexible than an integrated gearmotor. In addition, gearheads wear more quickly than motors and, when this happens, it’s only necessary to replace the gearhead and not the motor — which keeps maintenance costs down.

Even so, for some applications, an integrated gear-motor (with both the gearhead and motor in a single housing) is most suitable. Overall length can be an inch or more shorter than a gearhead-motor assembly. Using an integrated gearmotor also eliminates the task of considering the performance characteristics of two separate products. Instead, a single speed-torque curve indicates whether the gearmotor can sufficiently power the application. Finally, integrated gearmotors simplify assembly by preventing potential mistakes in gearhead-to-motor mounting.

Gearmotor drawbacks include the need to remove the entire assembly for servicing. If a mistake is made during the initial design, it’s costly to switch to another gearmotor, particularly when compared to the cost of only switching to a different gearhead.

New applications are also spurring the use of flangeface gearheads and gearmotors, which provide a direct mount to the rotating output shaft via a series of threaded holes. This eliminates the need for a flexible coupling, boosting torsional rigidity and dynamic system response. 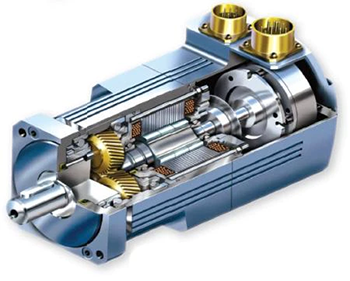