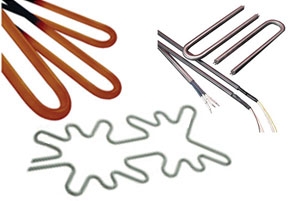 Tubular heating elements perform exceptional heat transfer by conduction, convection or radiation to heat liquids, air, gases and surfaces. In most heater assemblies, tubular element design configurations vary — round, triangular, flat press and formed. Bends are made to customer requirements Custom built from 0.200" to 0.475" diameters, a multitude of sheath materials with sheath temperature capabilities up to 1600°F, watt densities to fit many applications and up to 600 volts. Available with over 20 optional terminations and many stocked accessories.

Tubular Heaters are the most versatile of all electric heating elements.  They are capable of being formed into virtually any configuration.  Tubular heating elements perform exceptional heat transfer by conduction, convection and radiation to heat liquids, air, gases, and surfaces.

Single Ended Tubular Heating Elements are of similar construction as the standard tubular elements. They terminate at one end which can simplify wiring and installation.

Thin Blade Heaters provide greater surface area inch for inch than the traditional round elements.  With the Thin Blade equipment can be designed with more wattage in less space than a conventional element.

High Temperature Modular Hopper Heaters can be made to order to your hopper specifications. Low watt densities ensure long life while providing operating temperatures of 250°F (120°C) to 350°F (175°C) or higher.

Specialty Shaped Tubular Heating Elements are of similar construction to our standard tubular elements. Shaped heaters can be more ridgid and have a higher watt density, lowering the sheath temperature and extending heater life.  Heaters that are clamped to a surface have greater surface contact allowing for greater heat conductivity than conventional round elements.

With the capability to be formed into many shapes, the Mini-Tubular Heater is adaptable to a wide variety of applications.  Small diameters allow for a quick response, providing heat in tight spaces where most heaters cannot be installed.

Fill out our tubular heating application form and we will have one of our process heating experts contact you, or call
(855) 737-4718 to speak to one of our experts immediately.
Request a Quote Find an Office Training Courses Contact Us

Valin Was There For Us

When we needed technical assistance and applications support, Valin was there for us. Their knowledgeable engineers saved us an invaluable amount of time, helping us get up and running quickly. We are very happy with their services.
See More Testimonials