1. Source control, that is doing something to the valve to make it less noisy, and

2. Path control, that is doing something to prevent the noise from reaching the people who would be bothered by it.

There are two methods that are employed for source control of aerodynamic noise, pressure drop staging and flow division.

The second method of source control of aerodynamic noise is called "flow division." Flow division means that instead of having the flow pass through a single opening, the flow is divided up so that it passes through several openings in parallel. Every time you double the number of openings, you reduce the noise by 3 dBA. The reduction is due mainly to the fact that the smaller openings shift the noise to a higher frequency. The higher frequencies are attenuated more as the sound passes through the pipe wall than are the lower frequencies. Also, because the human ear (and the "A" weighting curve on noise meters) attenuate higher frequencies, both the measured and perceived noise is decreased. 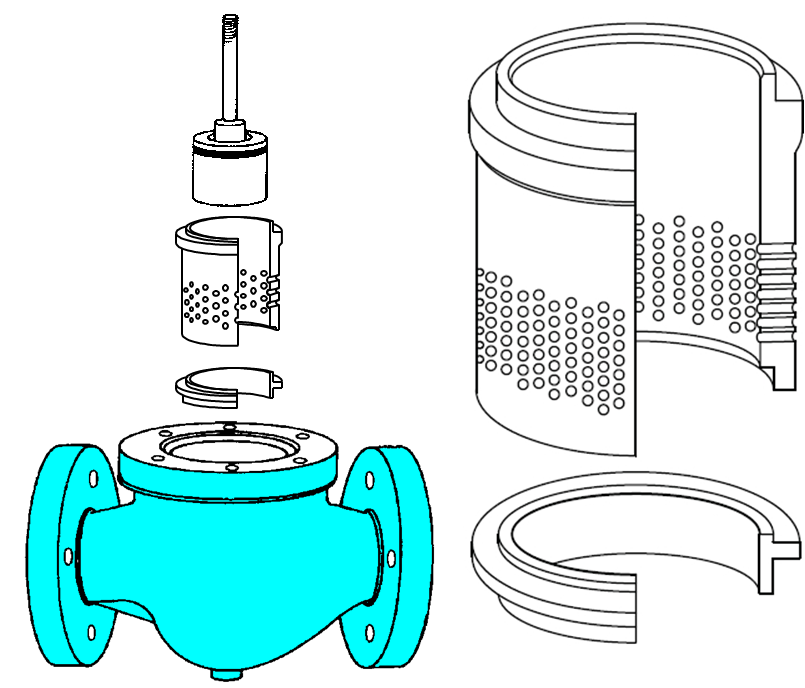 Figure 2. Implementation of flow division in a globe control valve.

Figure 2 is an example of how the principle of flow division can be applied to globe control valves. This is a cage with many small holes drilled in it, which divides the flow into many small flows and is the design used by two major manufacturers of globe control valves in their one stage noise trim which can typically reduce the noise by 10 to 15 dBA. 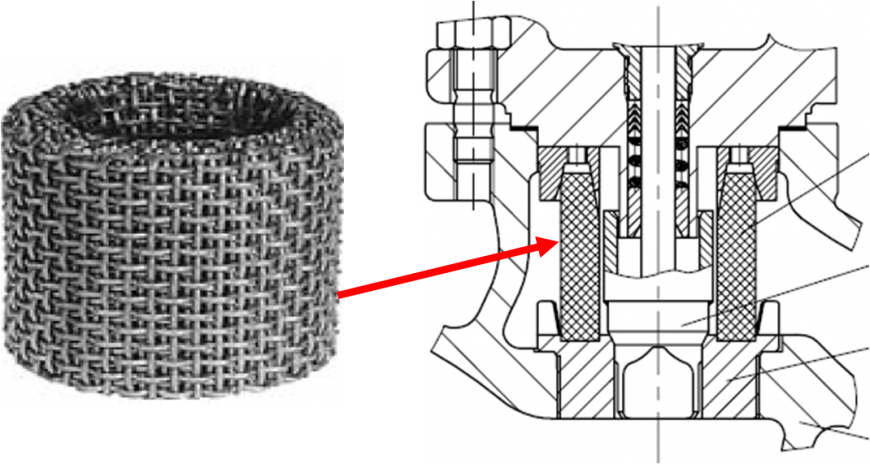 Figure 3 shows a multiple stage flow divider that can give 15 to 25 dBA noise reduction to an otherwise standard top guided control valve. The flow takes many pressure drops as it works it way through the many small openings in the wire mesh.

The valve design shown in Figure 4 is similar to a cage guided globe valve, except the cage is made of a stack of disks. Each disk has a pattern of multiple, multi turn channels etched into it. The multiple channels provide flow division, and the multiple turns in the channels provide pressure drop staging. It is possible to have 10 or 20 or more changes of direction, each taking a small portion of the overall pressure drop. This design is extremely effective in reducing aerodynamic noise, being able to reduce noise by 30 dBA or more. 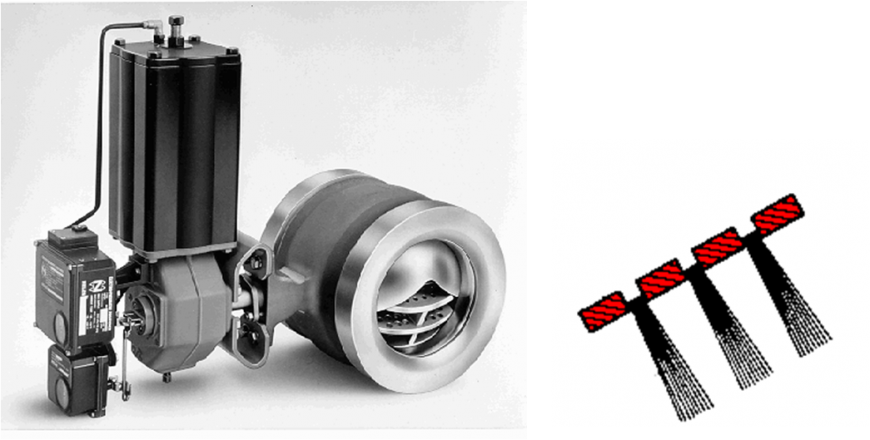 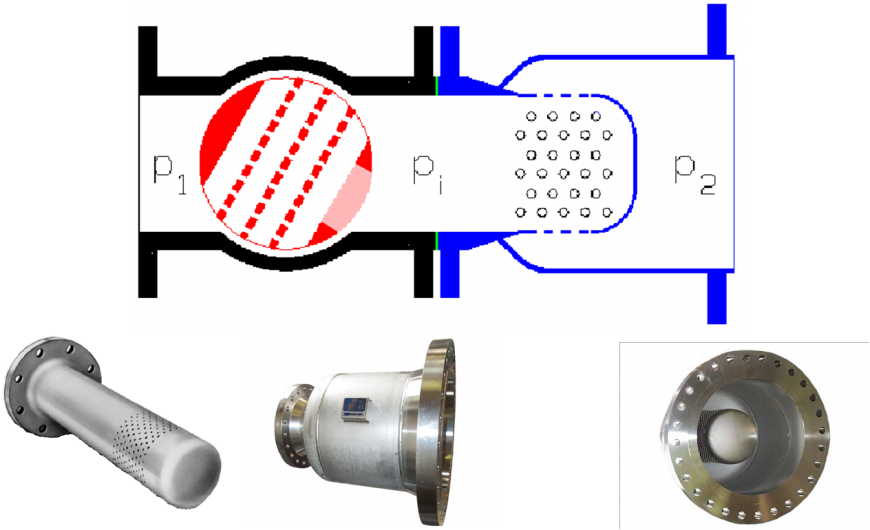 A static resistance, such as a diffuser downstream of a valve reduces noise by absorbing part of the overall pressure drop, so that the control vale does not have as large a pressure drop across it. The diffuser does the same thing as a single hole orifice plate would do, so far as absorbing part of the pressure drop, but it does it using the flow division principle which is a low noise way of creating a pressure drop. A single hole diffuser would generate as much noise as it removes from the control valve. Diffusers can reduce noise around 10 to 15 dBA.

The other noise control strategy is path control. Path control of noise is simply doing something to the space between the noisy valve (and downstream piping) and the people who would be bothered by it.

The three path control methods that we will discuss are: Distance, heavy wall pipe and thermal or acoustic insulation.

The distance effect depends on the type of noise radiator, with the common types of radiators being:

The reason the reference point in the table is 0 dB at 1 meter is because the noise calculations given by the various control valve sizing programs is the noise that will be measured 1 meter away from the pipe, therefore at a distance of 1 meter from the pipe there will be no reduction due to distance.

The thicker the pipe wall, the more the noise is attenuated as it passes through the pipe wall to where we hear it. The table below summarizes how much more attenuation is provided by schedule 80 and 160 than by schedule 40. 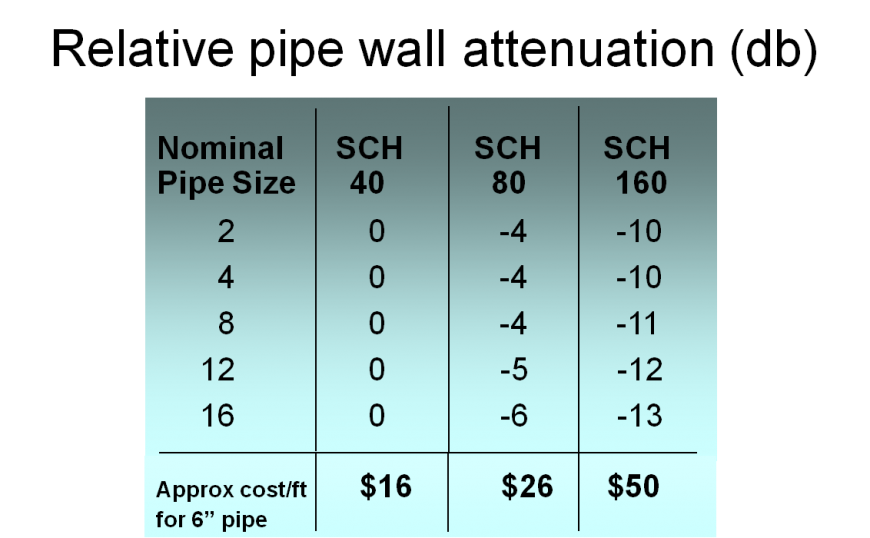 The approximate cost is an estimate I got from a pipe distributor for ASTM A106 carbon steel pipe. Someone pointed out that in addition to the pipe being more expensive, the fittings would also be more expensive and more pipe hangers or supports might be required.

Using thermal or acoustic insulation on the piping downstream of a valve can reduce the sound pressure level that people are exposed to. As with heavy wall pipe, the pipe must be insulated for as far downstream as you need to have the reduced noise level. 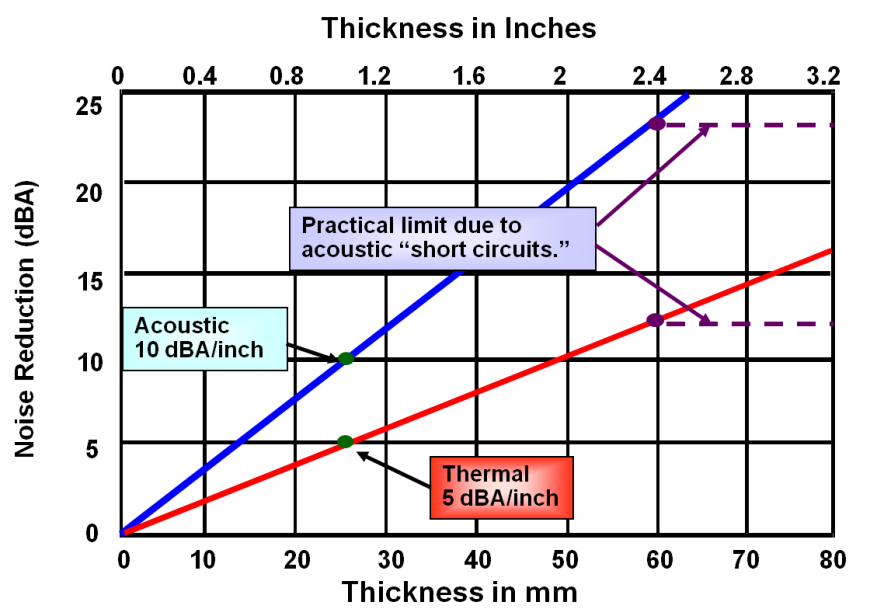 Since steam lines are usually insulated anyway to conserve energy, the 5 dBA per inch of thickness is essentially free. Special acoustic insulation is available that can reduce noise by as much as 10 dBA per inch of insulation thickness. Insulation over about two to two and a half inches does not provide significant additional attenuation, due to acoustic "short circuits" caused by voids in the insulation and pipe hangers.

This article is a follow-up to a previously published topic entitled, Aerodynamic Noise in Control Valves.


Other white papers that may be of interest: