Figure 2. Two valves with straight line installed characteristics. One with a steep slope and a high gain, and one with a shallow slope and a low gain.
It turns out that neither of these valves would make a very good control valve.
The low gain valve would not make a good control valve, because when the valve stem moves, the flow hardly changes at all. A control valve, that when it moves does not change the flow, is not much of a control valve!
The valve with the steep slope has a very high gain, meaning that small changes in valve position cause very large changes in flow.  It is less obvious why this valve would not be a good control valve. When two parts (such as a ball and a seat, or a valve shaft and packing) are in contact with each other, they exhibit two kinds of friction. When the parts are not moving, they tend to stick together and the friction is high. When they are moving the friction becomes much lower. The interaction between static and dynamic friction makes it very difficult to position a valve exactly where you want it.
It is fairly common to find installed valves that you cannot position much more accurately than within one percent of where you want them. From the definition of gain, the change in flow will be equal to the change in position multiplied by the installed gain (Δq = Δh * Gain). If the high gain valve (installed gain of 4) could only be positioned in one percent increments, the most accurately that flow could be controlled would be in 4 percent increments, which might not give accurate enough control.

Figure 4. Left, gain criteria 1, 2, and 3 shown graphically. Right, system response when gain change is 2.0 or less.
Typically, if the gain changes by not much more than a 2 to 1 ratio, it will be possible to come up with one set of PID tuning parameters that will result in good control and stability throughout the required flow range.
The right hand graph in Figure 4 shows the system response at the point of minimum gain and at the point of maximum gain in a system where the gain change within the specified flow range is 2 to 1.
In Figure 5, the gain within the specified control range is changing by almost a six to one ratio.

Figure 5. System response when the gain change is approximately 6 to 1.
If the PID controller is tuned when the system is operating at the point of minimum gain, then the set point is stepped we get a quick stable response (as we should, since this is the point where the loop was tuned).
Later, when the system is operating at the point of maximum gain, if we step the set point we get an oscillatory response because the PID parameters that were suitable for a low gain system are way too aggressive when the gain is much higher.
With large gain variation, if the loop is tuned where the gain is low, the loop becomes unstable where the gain is higher. If it is tuned for stability at the point where the gain is highest, control will be slow and sluggish when operating in the lower gain regions.
If you can’t find any valve that meets the first three criteria, or if you want to select the best valve of several that all meet the first three, then use criteria 4 and 5. 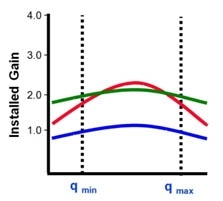 Figure 6. Applying Criteria 4 and 5.
The gain should be as constant as possible. The more constant the gain, the more aggressive can be the PID tuning without the danger of instability. Refer to Figure 6. If you had the choice between the green valve and the red valve, the green valve would be the best choice because the PID tuning could be more aggressive.
The gain should also be as close to 1 as possible. The green valve and the blue valve both allow equally aggressive tuning, but the blue valve is a better choice.
For a valve position error of 1%, the green valve would give a flow error of about 2% and the blue valve would give a flow error of about 1%.
Usually, when comparing the installed gain of different valves for the same application, as the gain becomes more constant it also comes closer to 1.
Program Graphs Installed Characteristic and Gain
Next, we will look at a control valve sizing program that, based on a database of actual valve inherent characteristics, along with some user supplied information about how the system pressure drop changes with flow, can calculate and graph the installed flow characteristic of a particular type and size valve in the system it will be used in. Then the program calculates the first derivative of the installed flow characteristic and graphs it as the installed gain. 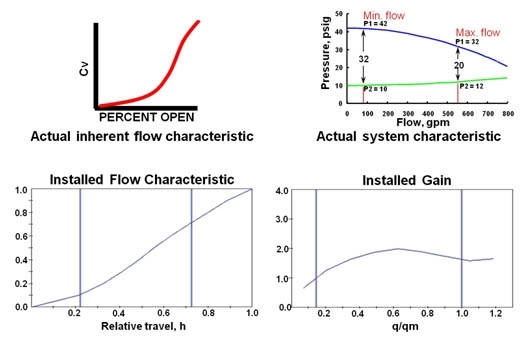 Figure 7. Program graphs the installed characteristic and gain based on tables of inherent flow characteristics, and user supplied information on the system characteristic.
In order for the program to define the process model, at least two flow points (maximum and minimum flow), along with the associated values of pressure upstream of the control valve, P1, and the pressure drop across the control valve, ΔP, are required.
Using Nelprof, the Neles control valve sizing and selection software, we will demonstrate how an analysis of installed gain can help select the best control valve for a particular system. The demonstration is based on the system shown in Figure 8. 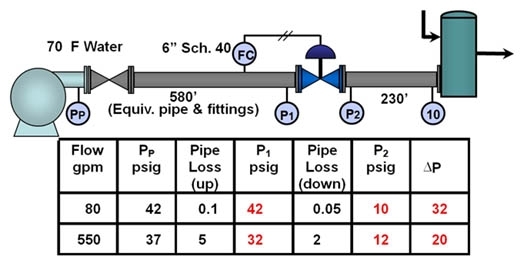 Figure 8. Flow control loop used to demonstrate how an analysis of control valve installed gain can help select the valve that will give the best control.
The task is to select a properly sized SEGMENT BALL control valve (which has an equal percentage inherent flow characteristic). Besides minimum and maximum flow rates, the computer program needs to know the pressure drop across the control valve at each of these flow rates.
The data relating to control valve pressure drop shown in Figure 8 was determined as follows: Start at a point upstream of the valve where the pressure is known, then at the given flow rate, subtract the system pressure losses until you reach the valve inlet, at which point you have determined P1. Then go downstream until you find another point where you know the pressure, then at the given flow rate work backward (upstream) adding (you add because you are moving upstream against the flow) the system pressure losses until you reach the valve outlet at which point you have determined P2. You can now subtract P2 from P1 to obtain ΔP.
The graph in the upper right of Figure 7 shows how P1, P2 and ΔP vary with flow as modeled by the software. The shapes of the  P1 and P2 curves are determined by the software by obtaining a least squares curve fit to the given values of P1 and P2, knowing that the curves will be parabolic and will have a slope of zero at zero flow.
Figure 9 shows the installed flow characteristic and installed gain graphs for three possible sizes of segment ball valve.
As the valve size gets smaller the characteristic will become more linear and the gain will get lower and more constant. (The goal is to select a valve whose installed gain is as constant as possible, and as close to 1.0 as possible.)
For this example, things like choked flow, noise, and velocity do not affect the selection, allowing us to concentrate on installed characteristics and gain.  The graphs below are what you would see if you performed the sizing calculations for a 6 inch, a 4 inch and a 3 inch Neles RE Series segment ball valve. 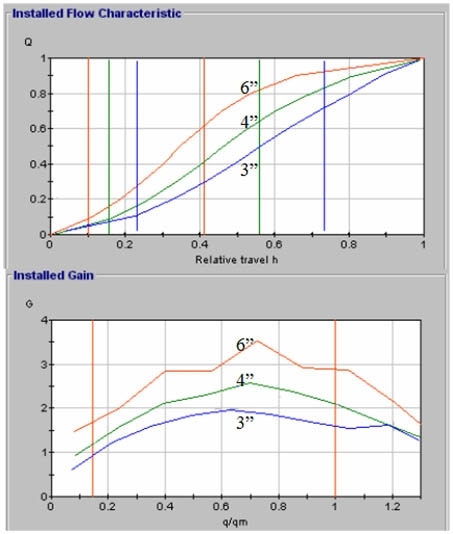