The purpose of a filter is to remove contaminants from a fluid stream either completely, or at least down to a given rating or specification.

Filters are used to help control contaminants and are rated according to their ability to remove these contaminants from a liquid, gas or air stream. There are different methods in which the performance of filters are specified.

Filter performance must always be associated with the test methods used to establish the rating.

The most common rating for liquid filters is the Beta Ratio.

It was introduced with the object of giving both filter manufacturer and user an accurate and representative comparison amongst filter media.

Process applications can contain a wide range of particles and other contaminants that leave the actual efficiency of removal a compromise between the amount and size of the contaminant the operator is willing to allow through the filter and the design of the filter required to capture the rest of the contaminating particles (the type of media will dictate efficiency of the filter. This can determine a large part of the operating cost).

Absolute ratings = ratings of 99.99% or greater for particulate contamination

A filter may not be able to remove all of the contaminants, there is a contaminant size cut-off point above which all contaminants will be removed by filter. The cut-off point is the contaminant size, usually expressed in microns (um) for particles, of the largest particle that will pass through the filter. This is not the smallest particle that is retained by the filter, smaller particles may be retained, by some adsorptive mechanisms or a charge added to the media. 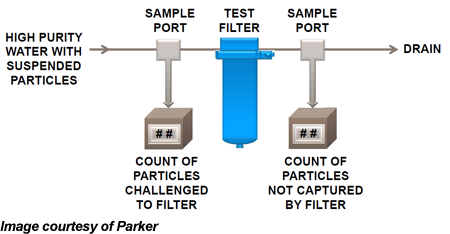 The actual shape of the particle may have a marked effect on the effectiveness of the filter. A particle may be able to pass through a pore of size considerably less than the particle’s nominal diameter if it lines up perfectly with the media pore or is able to deform.

The chance of such a lining up of particle and pore are rare. If the potential damage that could be caused by such a particle passing through the filter is serious. There are steps that can be taken to reduce the chances of this happening. The use a depth filter will reduce the chances of contaminant that can change its shape (gelatinous particles) from passing through the filter. Another method is to use two layers of the same filter media, this develops some depth, creating a more torturous and reduces the possibility of a continuous pore through both layers. 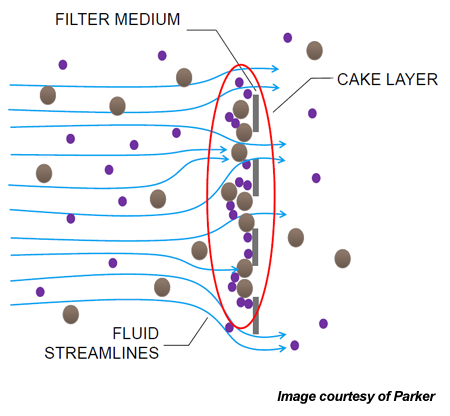 A filters efficiency will also increase as the filter develops a cake. The cake will decrease the permeability of the media increasing the filters efficiency. This can also explain why the performance of a filter can exceed its given micron rating that is based on the performance of a clean element tested under laboratory conditions. It can also be why test figures for identical elements can differ with different application conditions.

An absolute rating for a filter means the filter will retain 99.99% of the particle contaminant it is rated for. This limits the type of media that will have an absolute rating to those with a fairly consistent pore size that are capable of retaining at least 99.99% of particles (there are no filters rated at 100% efficient).

Process application results may vary due to a number of factors that need to be considered before specifying a filter.

Nominal rating = any rating less than 99% for particulate contamination

A nominal rating is an arbitrary value for the performance of a filter, determined by the filter manufacturer, and expressed in terms of percentage retention of a specified contaminant, usually latex beads, AC Fine Dust or AC Course Dust.

Figures typically quoted are at the level 98% or less retention of the specified particle size. 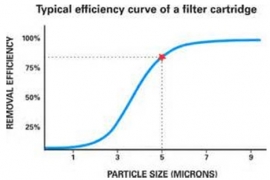 Some types of filter media, such as paper, felt and woven cloth, that have a variable pore size. The effective cut-off is largely determined by the random arrangement of pores and the depth of the media. The performance for these types of media are usually classified as a nominal cut-off or nominal rating.

The variations can be quite large. For example, a felt element with a nominal rating given as 30 um may pass 20–40% of particles of this size. At the same time, it may retain a proportion of much smaller particles. 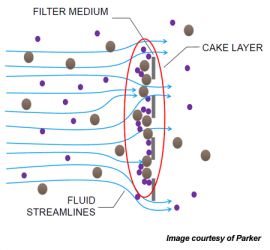 These filters efficiency will also increase as the filter develops a cake. The cake will decrease the permeability of the media increasing the filters efficiency. The cake will improve the performance of the nominally rated filter to a point that it may exceed its given micron rating that is based on the performance of a clean element tested under laboratory conditions. This improvement in performance will most likely be short lived due to the fact that it will occur toward the end of the filters useful life.