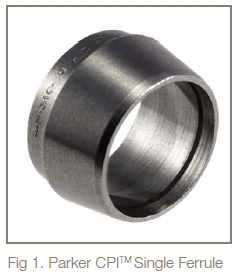 Stainless steel compression tube fittings for instrumentation applications have continued to evolve to meet requirements for ease of installation and high sealing integrity in increasingly demanding conditions. A recent example is the introduction of a fitting rated for sealing with hard drawn or thick walled stainless steel tubing at twice the allowable working pressure compared to previous stainless steel fittings with the standard safety factor of four. This is the MPI™ fitting by Parker Hannifin. These compression-principle fittings eliminate the problems with the cone and thread assembly fittings previously used, for instance, for running down high pressure, deep water oil wells.

The ability of compression fittings to provide the high performance demanded of them, depends on innovations of the ferrule, the most critical part of instrumentation fittings. It is highly engineered and requires considerable expertise and care in design, metallurgy and production processes. The ferrule must deform elastically and plastically in a very controlled manner during assembly of the fitting to properly grip and seal the tubing. The front edge of the ferrule must be harder than the tubing to grip the tube and seal through any surface scratches or defects, but the entire ferrule cannot be too hard or it will be too strong to deform properly. Therefore the hardening process used to achieve this should be applied to selected regions of the ferrule and the rest of the ferrule should have different, tightly controlled mechanical properties.

In addition, the hardening process must maintain the excellent corrosion resistance of stainless steel. The production processes must be developed and maintained to consistently produce defect-free ferrules with very tight geometric tolerances and metallurgical specifications.

Evolution of Ferrule Design and Development

The original CPI™ ferrule was machined from cold drawn stainless steel barstock. Cold drawing strain hardens the barstock for higher hardness and mechanical strength. This design was very successful but had limitations on sealing integrity and tube holding ability in some applications. Strain hardening allowed the ferrule to grip the tubing but did not provide sufficient hardness to the ferrule front edge to seal some tube surface defects such as scratches, weld seams, ovality and hardness variations.

Ferrules were sometimes plated with a soft metal (i.e. silver) for a better seal on tube surface defects in high pressure gas applications. This design was somewhat resistant to impulse pressures, thermo-cycles and vibration but the next generation of ferrule design would improve upon this considerably.

Many of the sealing technologies designed for optimum sealing integrity under either ultrahigh vacuum or high pressure utilize the concept of a hard edge deforming into a soft metal gasket1. This is discussed in some detail in Chapters 1 and 2 of Buchter2. The deformation of the soft component (the gasket) by the hard component (the hard edge) provides intimate metal-to-metal contact over the contact surfaces, causing surface irregularities to be overcome. The challenge was to adapt this process to the compression tube fitting, in which a hardened front edge of the ferrule would deform into the softer tubing.

This was addressed by the development of the case hardened ferrule, in which the surface of the ferrule was increased substantially in hardness by case hardening processes. This permitted the ferrule to shear through the surface defects and allowed for greater variability of the tubing.

Parker developed a full bore nitrided ferrule in the late 1970’s which was case hardened on the ID surface to a depth of approximately 0.004 inch by a conventional (traditional) gas nitriding process. This process achieved the necessary hardness in the gripping front edge of the ferrule while permitting the strength in the bulk of the ferrule to be optimized for mechanical performance. During fitting assembly the front edge of the ferrule is forced to shear down and forward into the surface of the tubing, locking the ferrule into the tubing. Upon disassembly of the fitting, the ferrule remained tightly locked to the tubing, allowing remakes with consistent sealing integrity. This seal was resistant to internal pressures, impulse pressures, temperature cycles and vibrations until failure of the tubing by fracture or fatigue.

The disadvantage of the conventional gas nitriding process (as well as conventional carburization and carbonitriding processes) is that it substantially reduces the corrosion resistance of stainless steel. The nitrided layer was generally so tightly “buried” into the surface of the tubing during fitting make up that it was not exposed to the corrosive effects of the chemicals contained by the system, but anything on the outside of the fitting, such as seawater, could penetrate from the back of the ferrule and attack the nitrided area.

In the early 1980’s, Parker revised the hardening process so that only a band approximately 0.050 inch from the ferrule nose back along the ID surface was nitrided, the “limited nitrided” ferrule. This substantially reduced the likelihood of corrosion attack from the back of the ferrule, as the nitrided band was buried into the surface of the tubing. The nitrided band was still a potential corrosion problem, however, if the contained chemicals did come into contact with it due to improper make up or defects in the surface of the tubing. Also, uninstalled fittings stored unprotected in a corrosive environment such as salt air sometimes developed rust on the nitrided band before use.

Conventional nitriding and carburizing processes for stainless steel must be performed at a high temperature in order for the hardening constituents, nitrogen and carbon, to penetrate the passive surface oxide layer that gives stainless steel its corrosion resistance. This high temperature allows chromium, the corrosion resisting alloying element, to diffuse through the metal. Chromium forms chemically stable nitrides and carbides, and therefore exists primarily as these compounds in the hardened layer. These very hard nitrides and carbides contribute most of the hardness of the layer. In this chemically combined form, however, the chromium is no longer available to resist corrosion, and the nitrided or carburized layer is very susceptible to corrosion attack in many environments, including seawater and even moist air.best suit the application.

The main criteria of any enclosure designed to protect instrumentation from severe cold is its thermal conductivity – the higher the conductivity, the greater the heat loss to the external ambient. The bigger the difference between internal and external temperatures, the higher the running costs, mitigated only by the thermal insulation qualities of the enclosure.

Parker has a vast experience of providing the fully fitted enclosure with the pre-installed components that is more reliable and easy to assemble in proper manufacturing plant conditions rather than on site in a cold environment. Optimal thermal insulation saves a lot of energy.

In addition, the stainless steel immediately under the layer often is sensitized due to carbon contributed by the process, and the entire bulk metal may be sensitized by the temperature and time required for the process. Sensitization is a phenomenon that can occur in austenitic stainless steel exposed to high temperatures. Carbon, which has a very low solubility in these types of stainless steel, precipitates as chromium carbides in the grain boundaries, depleting the regions adjacent to the grain boundaries of the chromium levels necessary to maintain corrosion resistance. Stainless in this condition is very susceptible, “sensitized”, to corrosion. A diagram illustrating these effects is shown in Figure 2.

The revolutionary Parker Suparcase™ ferrule hardening process does not require temperatures and times sufficient for diffusion of the chromium. The chromium therefore remains in solid solution as an alloying element available for corrosion resistance. Also, the bulk metal is unaffected by the process; there is no sensitization and the mechanical strength properties are not changed.

The Suparcase™ hardened layer is continuous, free of defects and voids. This is shown diagrammatically in Figure 3.

The process tends to “fill in” inclusions intersecting the surface, substantially reducing end grain corrosion effects. The Suparcase™ layer is ductile, able to deform with the ferrule during fitting assembly without cracking or spalling. 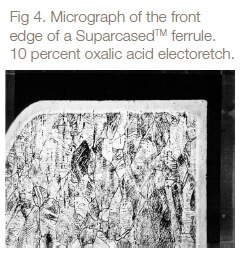 A micrograph of a polished and etched cross section of the front edge of a Suaprcased™ ferrule is shown in Figure 4.

The ething process has not affected the Suparcase™ layer, demonstrating its resistance to chemical attack, i.e. corrosion.

The Salt Fog test is designed to simulate exposure to a humid marine environment. The test samples are placed in a chamber with a salt source and having humidity sufficiently high to cause condensation.

In the Ferric Chloride test samples are immersed in a 6 percent ferric chloride solution at ambient temperature for the test period and evaluated by inspection for pitting corrosion and weight loss. This is an accelerated corrosion test used to rank the relative resistance of stainless steels and related alloys to pitting and crevice corrosion when exposed to oxidizing chloride environments. The results predict performance in certain real environments, such as natural seawater at ambient temperature and strongly oxidizing low pH chloride environments.

The test results are shown in Table 1. 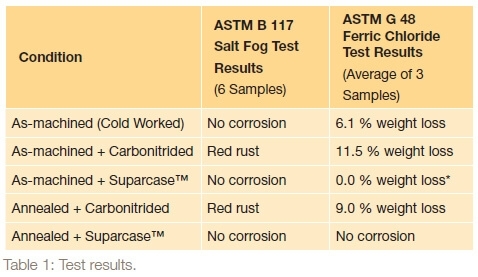 * One of the three samples had a small corrosion site that appeared to be crevice attack at a material defect. 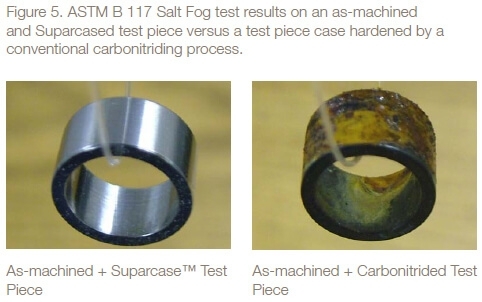 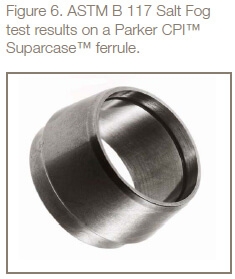 A Parker CPI™ Suparcase™ ferrule tested for 72 hours by the Salt Fog test is shown in Figure 6.

The as-machined test piece showed end grain pitting corrosion. This is corrosion initiating on surfaces that are perpendicular to the drawing direction of the barstock from which the product was made. This corrosion is typically initiated at the intersections of microstructural inhomogenieties such as inclusions with the perpendicular surface.

The test piece that was case hardened by a conventional carbonitriding process had both general corrosion attack over its whole surface and pitting corrosion. The pitting corrosion was most severe on the end grain surfaces, but also appeared on the other surfaces.

Recently additional lower temperature case hardening processes for stainless steel have been developed [5,6,7,8,9,10]. In the last few years other compression fitting manufacturers began to introduce their versions of stainless steel ferrules utilizing some of these developments.

Mechanical Action of the Ferrule

In addition to the hardening process, the mechanical properties of the ferrule must be designed and controlled precisely to achieve the proper functioning during assembly and use of the fitting. This requires that the composition of the Type 316 austenitic stainless steel used to manufacture these fittings be controlled within a much narrower range to ensure that consistent hardness and strength levels are attained.