Submitted by Jon Monsen
I was recently asked how the pressure at the vena contracta of a control valve in a liquid application can be determined. I am sharing my answer below.

Here are some comments on the pressure at the vena contracta:

The Liquid Pressure Recovery Factor, published by control valve manufacturers for each of their valves, is defined as:

ΔP is the pressure drop across the valve (P1 – P2)

P1 is the absolute pressure upstream of the valve.

PVC is the pressure at the vena contracta.

It is important to understand that this equation is only valid when the density at the vena cotracta remains constant. It does not apply when there is vaporization at the vena contracta.

The valve manufacturers determine the FL of their valves by increasing the pressure drop across the valve until flow becomes fully choked.

Once the test determines that flow is fully choked (the flow does not increase with increasing pressure drop), the point where the red and green lines on the figure intersect is defined as the transition point between non-choked flow and choked flow and is also the point that separates the IEC equation for liquid non-choked flow from the IEC liquid equation for choked flow. The IEC does not give this point a name. I like to call it the "Terminal Pressure Drop," abbreviated ΔPT . Others have called it various things, such as "Allowable pressure drop" "Critical pressure drop" and "Max pressure drop," to mention a few.

The valve manufacturer then solves the IEC equation for the Choked flow point (what I call ΔPT ) to come up with FL. 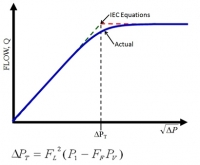 Where PC is the thermodynamic critical pressure of the liquid.

Most of the polished information i have seen on choked flow and cavitation is based on tests with cold water. I have no experience with or knowledge of the effects of solutions and mixtures of liquids, such as hydrocarbon liquids.

Other white papers that may be of interest: