Submitted on Wed, 12/14/2016
Machine designers are increasingly turning to gearheads to take advantage of the latest advances in servo motor technology. Essentially, a gearhead converts high-speed, low-torque energy into low-speed, high-torque output. A servo motor provides highly accurate positioning of its output shaft. When these two devices are paired with one another, they enhance each other’s strengths, providing controlled motion that is precise, robust, and reliable.

As servo technology has evolved, with manufacturers producing smaller, yet more powerful motors, gearheads are becoming increasingly essential partners in motion control. Finding the optimal pairing must take into account many engineering considerations. Before addressing those, a short review of gearhead basics may be helpful.

So how does a gearhead go about providing the power required by today’s more demanding applications? Well, that all goes back to the basics of gears and their ability to change the magnitude or direction of an applied force. Gearheads can accomplish this in a few different ways.

Torque Multiplication: The gears and number of teeth on each gear create a ratio. If a motor can generate 20 in-lbs. of torque, and a 10:1 ratio gearhead is attached to its output, the resulting torque will be close to 200 in-lbs. With the ongoing emphasis on developing smaller footprints for motors and the equipment that they drive, the ability to pair a smaller motor with a gearhead to achieve the desired torque output is invaluable.

RPM Reduction: A motor may be rated at 2,000 rpm, but your application may only require 50 rpm.  Trying to run the motor at 50 rpm may not be optimal based on the following;
A gearheads ratio reduces the motor rpm, which is why gearheads are sometimes called gear reducers.  Using a gearhead with a 40:1 ratio, the motor rpm at the input of the gearhead will be 2,000 rpm and the rpm at the output of the gearhead will be 50 rpm. Operating the motor at the higher rpm will allow you to avoid the concerns mentioned in bullets 1 and 2.  For bullet 3, it allows the design to use less torque and current from the motor based on the mechanical advantage of the gearhead.

Inertia Matching: Today’s servo motors are generating more torque relative to frame size. That’s because of dense copper windings, lightweight materials, and high-energy magnets. This creates greater inertial mismatches between servo motors and the loads they are trying to move. Using a gearhead to better match the inertia of the motor to the inertia of the load allows for using a smaller motor and results in a more responsive system that is easier to tune. Again, this is achieved through the gearhead’s ratio, where the reflected inertia of the load to the motor is decreased by 1/ratio^2.

Recall that inertia is a measure of an object’s resistance to change in its motion and is a function of the object’s mass and shape. The greater an object’s inertia, the more torque is needed to accelerate or decelerate the object. This means that when the load inertia is much larger than the motor inertia, sometimes it can cause excessive overshoot or increase settling times. Both conditions can decrease production line throughput.

On the other hand, when the motor inertia is larger than the load inertia, the motor will need more power than is otherwise necessary for the particular application. This increases costs because it requires paying more for a motor that’s larger than necessary, and because the increased power consumption requires higher operating costs. The solution is to use a gearhead to match the inertia of the motor to the inertia of the load.

Gearheads often drive long mechanisms, such as material-feed systems that move lengths of wire, wood, or metal, where high speed is not essential but high torque and highly repeatable accuracy are critical. Pairing a servo motor with the appropriate gearhead in this type of application can provide flexibility that cannot be matched with a traditional direct-drive motor. The servo-gearhead combination will cost less to operate, take up less space, and will provide an inertia match for better motion control.

Additional applications for which servo-gearhead combinations are particularly well-suited typically fall into the same high-torque, lower-speed category as material feed systems. For instance, industrial robotics rely heavily on gearheads. Pick and place systems, which are widely used in applications such as automotive manufacturing, injection molding, and heavy equipment manufacturing, all require the highly accurate output provided by a servo motor. Adding a gearhead to that motor provides the torque needed to deal with the inertia involved in these demanding applications.

Applying Gearheads: So Many Choices

Machine designers have a variety of options when evaluating gearheads for an application. 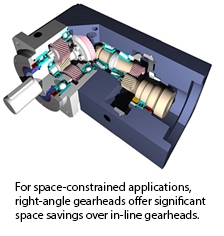 In-Line Gearheads: These are commonly used for motion control applications because they have lower backlash and cost less than right-angle gearheads. In-line gearheads have an output shaft that is in line and centered with the motor shaft.

Right-Angle Gearheads: This type is commonly used when the servo motor must fit into a tight space. The gearhead’s output shaft is at a 90-degree angle to the motor shaft; therefore, most of the gearhead housing, and all of the motor housing, is parallel to the side of the machine, providing a smaller machine envelope.

Separate Motors and Gearheads: Most motion control systems that employ gearing use separate motors and gearheads. This allows choosing the motor and gearhead most appropriate for the application, even when they come from different manufacturers. Typically, gearheads can be mounted to just about any servo motor. All that is required is a mounting kit, which is typically provided by the gearhead manufacturer, to attach the gearhead to the motor flange and shaft. This configuration is more flexible than an integrated gearmotor and it’s easier to maintain. 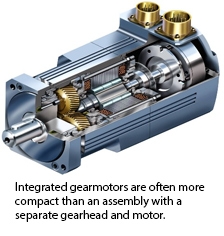 Integrated Gearmotors: This is the best choice for certain applications. One advantage is that the overall length of the assembly can be considerably shorter than an assembly with a separate gearhead and motor. System design is also simpler because only one speed and torque curve is needed to determine if a gearmotor will provide the necessary performance to power the motion control system.

Flange-Face Gearheads: A somewhat newer trend is the use of flange-face gearheads. The machine being driven mounts directly to the flange, which eliminates the need for a flexible couple and all of its associated problems.

There are several gear technologies available in the market today.  They include spur, planetary, worm, harmonic, and cycloidal gearheads.  Some of the main criteria to consider in the selection process are torque density, backlash, torsional stiffness, and efficiency.

The higher the torque density, the greater amount of torque (rotational force) relative to the size of the gearhead is generated. Planetary, harmonic, and cycloidal gearheads are comparable to one another and can have torque densities that are up to 5 times greater than worm or spur designs. This value is expressed in units of torque per volume such as inch-pounds force per cubic inch. 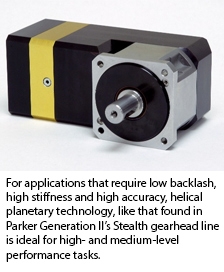 Backlash is the amount of motion generated at a gearheads output shaft when the input is fixed, specified in arc min (1 arc min. = 1/60 of a degree). Typically it is measured by applying 2 percent of the rated output torque to its output shaft while the input is locked. For high precision, the lower the backlash, the better. Harmonic drive gearheads are rated at zero backlash due to the pre-load that exists between its flexible spline and outer ring gear. Planetary, worm and cycloidal designs can achieve 1 to 3 arc min. on their high precision models. Some worm gear manufacturers also pre-load for zero-backlash capability.

Torsional stiffness measures torsional stability (rotational displacement) of the output shaft and gear train while the input is fixed and after backlash is removed (any continued displacement after the 2 percent of rated torque called out in the aforementioned backlash definition). With torsional stiffness, the higher the number the better, as that will be the amount of torque required to displace the shaft an extra arc min. With higher torsional stiffness, there is a lower amount of settling time as a gearhead starts and stops while driving the application. This helps to support higher throughputs. Planetary and cycloidal designs offer the highest values relative to the size of the gearhead. Worm and spur designs provide lower values, with harmonic gearheads offering low stiffness due to the springiness of its flexible spline. This value is measured in in-lb/arc min.

Efficiency is a measurement of lost power transmitted through the gear head, typically stated as a percentage of input power. If a gearhead is rated as 95 percent efficient at its nominal torque, then 5 percent of the motor’s torque at input will be lost by the time it reaches the output shaft where the load is driven.  If a gearhead is too inefficient, then it may require a larger motor to make up for this loss. Spur and planetary gearheads are typically 90 to 95 percent efficient. Worm gearheads range from 70 percent efficiency at higher ratios (50:1) to 90 percent at lower ratios (5:1). Cycloidal gearhead efficiencies typically range from 65 to 80 percent. Harmonic gearheads may suffer in efficiency also due to the constant pre-load of the flex-spline against its ring gear.

Put Your Engineering in Gear

Virtually any controlled motion application that requires high torque and lower speed can be improved with the right combination of servo motor and gearhead. Combining these two technologies often offers lower operating cost, smaller size, and higher reliability than direct-drive motors can provide.

As servo motors become smaller and stronger, gearheads will keep evolving as well. Together they’ll provide the controlled motion that tomorrow’s applications will demand.