Submitted by Jon Monsen, Ph.D.
on Mon, 01/05/2015
The principle difference between the nature of the flow of gas and the flow of liquid through control valves is that liquids are incompressible and gasses are compressible. When the pressure of a liquid changes, the volume and density, ρ, remain unchanged, while on the other hand, pressure changes in a gas result in both volume and density change. When observing flow through a control valve vs. pressure drop, both liquid and gas flows can choke, that is, at some pressure drop, flow stops increasing with increasing pressure drop, but for different reasons. 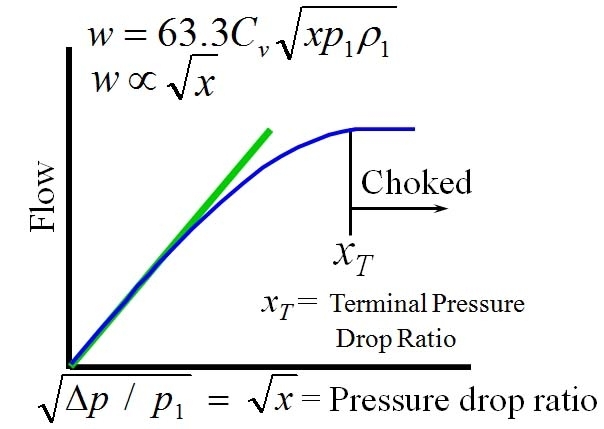 Figure 1. Flow of gas vs. pressure drop ration through a control valve.

The equation for flow at the top of Figure 1 is almost identical to the equation we would use for liquid in cases where flow was given in pounds per hour. (Note that the subscript, 1, for pressure and density indicate that they are the conditions upstream of the valve.) The only difference is that instead of using the square root of pressure drop (Δp) in the equation and for the scale of the horizontal axis of the graph, we use the square root of the “Pressure drop ratio,” Δp/p1.  We then substitute the single character, x, for Δp/p1 to make the expression simpler. Making this change makes the expression “Δp” which would appear in the equivalent liquid equation, equal to “x p1.” (Δp/p1 X p1 = Δp) This change from the liquid equation is not absolutely necessary, but we will see later that it makes the prediction of gas choked flow much more convenient. The equation at the top of Figure 1 tells us that flow is proportional to the square root of x. Graphing the equation results in the upward sloping green line.

If we were to conduct a flow test, the actual relationship between flow and pressure drop ratio would be as shown by the curved blue line, not the straight one. At low pressure drop ratios the flow follows the straight line, but then it deviates more and more until at last, further increases in pressure drop ratio do not yield any additional flow. At this point we say that flow has become choked. Since for gas flow, we have chosen to call the horizontal axis the “x” axis instead of the delta p axis, we define the pressure drop ratio at which flow becomes fully choked as the Terminal Pressure Drop Ratio, and give it the symbol xT, T standing for “Terminal.” 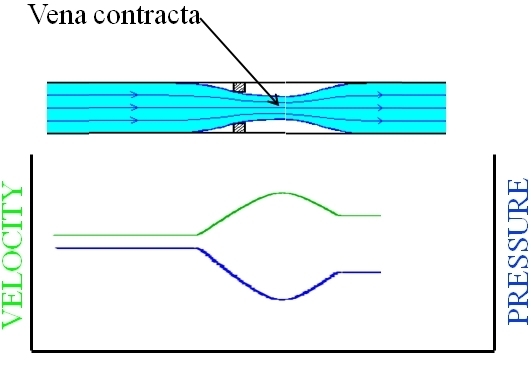 Figure 2. Gas velocity and pressure profile inside a control valve

Figure 3. Density change and vena contracta enlargement are responsible for the shape of the flow graph.

Summarizing how the gas flow graph gets its shape: 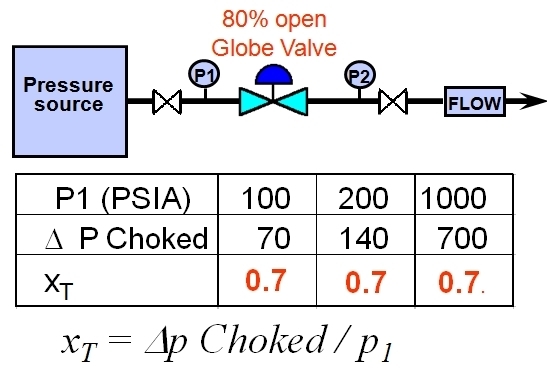 Let’s see what would happen if we were to run the three flow tests listed in Figure 4, using a typical GLOBE valve, with the inlet pressure, p1, at first 100 psia, then at 200 psia, and finally at 1,000 psia.

With p1 at 100 psia and starting with delta p at zero and gradually increasing it we would find that flow would choke when the pressure drop was 70 psi.

Now, if we calculate the value of xT for each of the tests (since x is delta p divided by p1, xT, the choked value of x, is delta p Choked / p1) we see something very interesting. xT turns out to be 0.7 in each case.

In order to properly size control valves for gas service, it is necessary to know at what pressure drop flow will choke. Different valve styles have different values of xT , and for each valve type, xT also varies with valve opening.

Figure 5. Typical values of xT and how they affect the flow through control valves.

Valve manufacturers test their valves for xT and then publish the results, making it possible to predict the point at which flow will choke and therefore properly size control valves.

The blue line on the left hand graph represents the flow through a globe control valve, where xT is 0.7. (That is, flow will choke when the pressure drop is 70% of p1. As an example, this upper line could represent a 6 inch globe valve at 80% open which would have a Cv of about 250. A 4 inch high performance butterfly valve operating at around 70% open would also have a Cv of about 250. Although both valves have the same flow capacity (CV), the graph of flow through the butterfly valve (red line on the left hand graph) looks quite different than the graph of flow through the globe valve. That is because it has an xT of 0.4, meaning that flow chokes when the pressure drop is 40% of p1. At low pressure drop ratios, the flow is the same through both valves, but as the pressure drop ratio increases, the flow in the butterfly valve starts aiming toward choked flow before the flow in the globe valve does. Understanding this will help you understand why a sizing calculation may show that, with all the flow conditions the same, one style of valve will need a larger Cv than is required of a different style of valve.

Most tables of gas properties include values of the Ratio of Specific Heats. 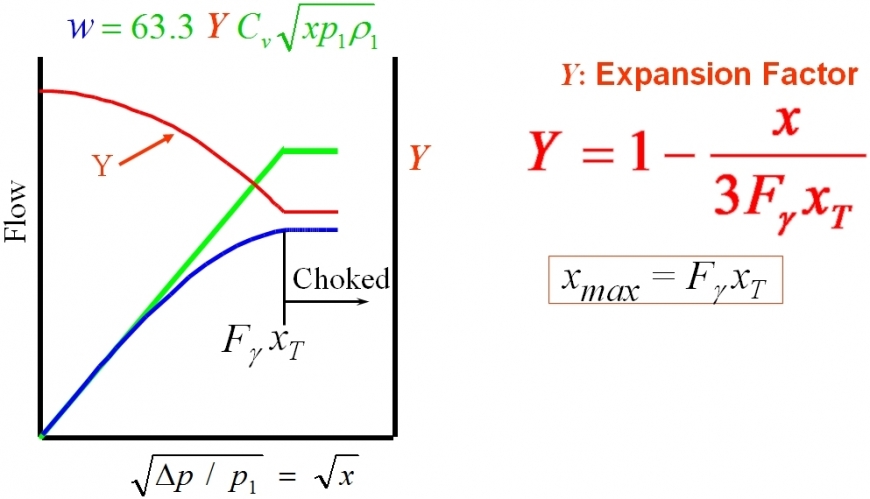 Figure 6. The ISA/IEC gas flow equation including the "Expansion Factor", Y, which compensate for density change at the vena contracta and vena contracta enlargement.

Note that older versions of the ISA control valve sizing Standard, and some manufacturer’s literature, use the symbol “k” for the Ratio of Specific Heats.

The equation at the top left of Figure 6 is the ISA/IEC gas equation with mass flow in pounds per hour as the dependent variable.

Y is a function of x, the pressure drop ratio. When plotted on a square root scale, the graph of Y looks like the red line labeled “Y” in Figure 6.

Multiplying the straight green line (the flow graph if there was no density change and choking) by Y results in the actual flow graph (blue line). It is important to limit the value of x used in sizing or flow calculations to the choked value (Fγ xT), otherwise Y would decrease below 0.67 and the predicted flow, after reaching a maximum value at x = Fγ xT  would then decrease, which we know is not the case. 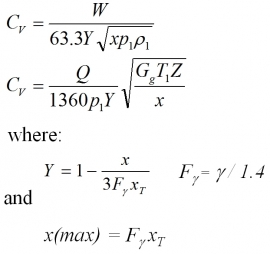 Figure 7. Summary of the most common forms of the ISA/IEC control valve gas sizing equations.

The top equation is the one we have been using so far, but rearranged to solve for Cv instead of W. This form is appropriate for gasses and vapors (including steam) where flow is in mass flow units (pounds per hour) and where the upstream density is known. The second equation, which is simply the first equation, with appropriate unit conversions for flow in volumetric units (scfh) and with the density calculated from the specific gravity, absolute temperature, absolute pressure and compressibility factor.

Here are links to white papers that may be of interest: