Submitted by Brian Handerhan || Parker
on Tue, 10/11/2016
Almost everyone knows someone whose life has been touched by heart disease or cancer—the two leading causes of death in the United States.1 Today, researchers are using DNA sequencing to better understand the genetic links we have with diseases and how it can influence the course of treatment. We are standing on the edge of the personalized medicine healthcare revolution, which will be fueled by the widespread adoption of DNA sequencing as a diagnostic tool. 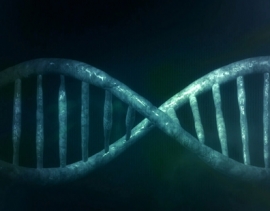 Today, on average, any given prescription drug on the market is effective for about half of those taking it.2 And only about a quarter of today’s cancer treatments are effective on a given individual, a discouraging statistic, considering the devastating impact cancer treatments can have on people. However, it’s a statistic that will change for the better as more of the world’s population have their genome sequenced. That information will be used to help treat their diseases or help them avoid getting diseases to which they are genetically prone.

So DNA sequencing at its best is about personalized medicine. It will reveal whether a person is a high risk for certain diseases and then help the physician put that patient on a medication regimen, which an individual’s system will not only tolerate, but thrive upon. In getting to that point, physicians will be able to unravel clues to a person’s unique system coding much quicker and with more clarity than is possible today.

The Costs of a Cure

The mass implementation of personalized medicine through the universal applications of DNA sequencing will depend on continued reduction in costs. That’s where instrumentation developers and their technology partners play a vital role. Automation is a particularly challenging element in this complex instrumentation, and can make a vital contribution to cost control. Parker’s expertise in motion and control, built over years of work in both semiconductor and DNA sequencing applications, can help instrument OEMs develop their processes to be as cost effective as possible.

The major cost drivers in DNA sequencing are:3

Parker can play a major role in helping OEMs manage the cost of the first two items for its customers by helping to optimize the process, thus reducing the costs of labor, support and consumables. Additionally, optimizing the machine performance cost trade-offs helps to manage the overall capital cost of the instrument. As those manufacturers change their technologies and specify new motion systems, they will need a partner with the expertise to provide consulting services on motion, not just the motion hardware.

Parker’s expertise in this space dates back to the early sequencing efforts of the university laboratories instrumental in developing the techniques that are now mainstream. When the human genome was first sequenced as part of the Human Genome Project it cost an estimated $2.7 billion. Through huge advances in concurrent capture and processing, the cost is now approaching $1000 to sequence a whole human genome.4

Motion and control technologies have been an important factor in developing these next generation sequencing technologies. As a supplier to leading instrument manufacturers, Parker’s equipment and expertise has played a key role in these advancements.

Translating the Language of Automation

Many instrument manufacturers have developed proprietary technologies to differentiate themselves from the competition. Their application of next generation technology enables a dramatic reduction in the cost to their customers, thanks to the ability to capture massive amounts of parallel data.

All current Next Generation Sequencing (NGS) techniques tend to fall into two major buckets from a motion control standpoint based on the characteristics of the motion required. The first involves a continuous scan process. This motion is characterized by continuous runs where readings are taken “on the fly.” The second is a step and settle process. This motion is characterized by incremental indexing steps where a reading is taken at each individual step. Both of these techniques typically include an X-Y motion element that is moving the sample of interest and a Z motion element that is moving an optic or sensor that is performing a focusing function.

Settling time – The time required for a step response of a system parameter to stop oscillating or ringing and to reach its final value.

Following Error – The position error or difference in position between the commanded position and the actual measured encoder position.

Flatness of Travel – This measures deviation from ideal straight line travel in a vertical plane (also referred to as vertical run out).

Straightness of Travel – This measures deviation from straight line motion in a horizontal plane (also referred to as horizontal run out).

Velocity Ripple – A measure of a positioning stage’s motion smoothness. This is typically measured in percent variation from a nominal value at a given sampling interval.


Frequency Response – In its most simple form, frequency response can be thought of as a measure of system stability. This includes both the system’s closed loop bandwidth and the natural frequency of the system.

Encoder Sub Divisional Error – Cyclical errors resulting from the encoder read head that repeat every period of the scale.

Continuous scanning is a “capture on the fly” process where “images” are captured while at least one axis is in motion. Images are captured in one of two ways:

Ultimately, the encoder trigger method is the best, since it synchronizes the triggering of the camera to the exact position of interest. With the timing method, minor variation in the stage velocity or drift of the trigger clock can cause poor imaging, especially if images are very close together.

In either of the above methods, constant velocity (or minimization of velocity error) is one of the key motion attributes for the X-Y motion system. To achieve this, the best technological approach is to use ironless linear motors with high performance linear encoders.

The best measurement to gain a true understanding of the system performance is to look at the encoder following error. To maximize system performance, it is necessary to minimize the sub-divisional errors of the encoder technology employed and to optimize the servo position control loop. There is a definite trade-off in price and performance when looking at optimization of following error and control loop. While maintaining a reasonable commercial cost, the system can be optimized to achieve following errors on the order of 200 nanometers at relatively aggressive scanning speeds. 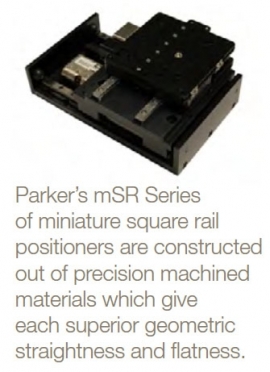 High frequency variations in X-Y flatness do not allow enough response time for the focusing axis to compensate for short cycle variations. The flatness and straightness must be maintained below 150 nanometers per millimeter of motion for optimal performance. The biggest constraint to speeding up this process is the ability of the focusing system to reach the short cycle out of flatness variation in the system. To resolve this issue, either the reaction times of the Z axis must be improved or the flatness needs to be improved. The current technology being employed for this axis is either cross roller stages or linear guide bearing stages. With continued advancements in linear guide bearing technology, these stages have become very competitive in providing for short cycle flatness consistency. To optimize the performance for this critical feature, stages must be designed with relatively heavy cross sections and super precision bearings.

For the Z focusing axis the main attribute is the move and settle time so that it can compensate for both variation in the sample and the flatness variation of the X-Y stage. The ideal technology for achieving the optimum move and settle time is a linear motor stage with a magnetic counterbalance. The linear motor allows for maximum acceleration and deceleration and when paired with the proper feedback provides exceptional position stability. 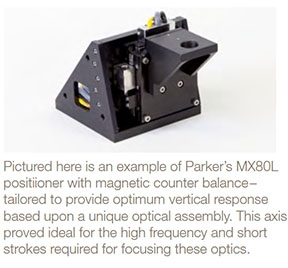 To optimize the performance of a Z focusing stage, it is ideal to couple it with a magnetic counter balance. If properly sized, the magnetic counter balance offsets the force of gravity on the load and stage carriage by supplying a constant opposing force over the entire length of travel. This provides both a safety feature in a power off situation and a power conservation feature while running. Additionally, it allows for a smaller overall motor to optimize the dynamic performance.

Motion Requirements for a Step and Settle process

This process is about moving into position and reaching a level of stability before the image is captured. The most critical attributes are how quickly the target position can be achieved and how stable the position can be held. As with many “optics-based” systems requiring solid stability, a common solution is to use a stepper motor with a sliding friction lead screw as the driving mechanism.

Because the stepper motor is an open loop device, there is no servo loop that can cause position hunting. A common practice is to use a secondary encoder to confirm position as a verification step. Gaining the positional accuracy typically requires a relatively fine lead (1 – 2 mm per revolution), which limits the speed to 20 to 40 mm per second. Both speed limitations and duty cycle can drive the overall cycle time up depending on move lengths and stationary imaging times. 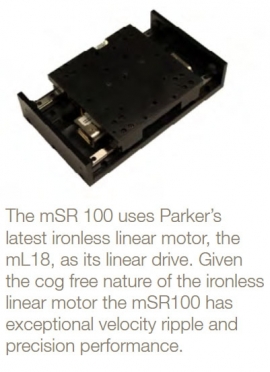 The improvement trade-off in this type of application is between cycle time and stability. To optimize the cycle time, move from the lead screw stepper motor drive train to an ironless linear motor drive train. The linear motor solution will be capable of speeds over 1000 mm per second. To gain the proper level of stability, it will be critical to select a linear encoder that has 3x to 10x higher resolution than the stability you are looking to achieve.

Cycle times can be reduced dramatically by moving to ironless linear motors given the dramatic increases in acceleration, deceleration and velocity. There are speed limitations depending on the stability required. For example, a .01 micron encoder will have velocity capability very similar to a lead screw stage on the order of 30 mm / sec. Even at the same velocity, the linear motor solution will reduce cycle time as a result of better acceleration, deceleration and duty cycle.

Why is Parker the right partner?

Automation and motion control are key subsystems in the race to reduce the cost of genome sequencing instrumentation. With nearly 20 years of experience in DNA sequencing and additional experience in other high technology precision markets, Parker offers the expertise and consulting services to help instrumentation developers optimize the precision of their equipment and their process. These game changing process optimizations will contribute to continued reductions in the cost to sequence the individual genome, making the promise of personalized medicine a reality for all in the future.

Valin Corporation is an authorized distributor of Parker and partners with Parker to give our customers the best possible solution.