Submitted by Scott Severse || Valin
on Fri, 07/08/2016
Conserving electricity and water are as important as ever for companies in order to reduce operating costs. One area where the experts at Valin can help with this goal is through the use of a conductivity controller for the water treatment program of a cooling tower.

The water enters at the top of the tower and cascades over PVC fill or a tube bundle. This causes the water droplets to decrease in size and increase the surface area for rapid heat transfer. The evaporation rate is increased when the fans energize and blow air across the droplets, this occurs on demand when the temperature drop cannot be achieved by water flow alone.

Minerals are left behind and concentrate in the remaining water when evaporation occurs. All minerals have a saturation point. This point is often dependent on the concentration, water pH and temperatures. If the concentration of minerals in the remaining water exceeds the saturation point, the minerals come out of solution and will eventually deposit on internal surfaces of the cooling system, referred to as "scaling". The most prevalent scale is calcium carbonate, which precipitates in the hottest area of the cooling system. Scale can be very troublesome as it has an insulating effect, decreasing the amount of heat that can be removed by the cooling tower. Scaling can also often cause pumps and fans to be overworked. The equipment must operate longer in order to dissipate heat from the cooling equipment. This will have a negative effect economically as it will result in higher electrical costs and adversely affect the longevity of the equipment. For example, 1/10 of an inch of scale will increase cooling costs by approximately 40 percent.

So How is the Threat of Scaling Managed? 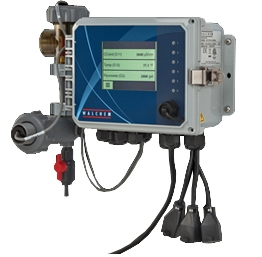 The most common method used in the industry to prevent harmful scaling is the practice of adding chemicals that cause crystal distortion of the scaling minerals called threshold inhibitors. Additionally, utilizing acid, most commonly sulfuric acid, will help control the pH and reduce the alkalinity so greater cycles of concentration can be used.

Valin recommends the use of a conductivity controller in order to bind the scaling minerals together, more specifically, a Walchem W600 Series Controller. This series operates on the principal of ions conducting electricity. When there are more ions present, there is more conductance – measured in uSeimens, in the water. Valin will analyze the water and based on its findings, a conductivity range can be calculated and recommended. This allows a concentration of minerals in the tower water and only when the saturation point is approached, will bleed-off begin to occur. Considering parameters such as conductivity, pH, temperature, alkalinity and calcium hardness, a particular scale inhibitor used inherently contains a RSI/LSI (Ryznar/Langlier Indicies) number. This number is associated with its ability to inhibit scale.
The use of acid to convert carbonate alkalinity to carbon dioxide is commonly used on large cooling water systems, due to the low cost of acid and the accompanying increase in cycles of concentration and reduction in water usage. The main drawback to this method is the hazards associated with handling strong acids.

The Walchem W600 Series Controller will activate a chemical pump that adds chemicals for scaling and corrosion that is consistent with the amount of make-up water or bleed-off experienced.  In order to maintain a constant chemical residual, a proportional amount of chemical must be added based on the water usage. This is referred to as proportional control.

Another element of the cooling towers that must be controlled is the inevitable biological growth. This includes anything from bacteria to algae, and everything in between. These organisms can cause disease, corrosion and can also reduce heat transfer.  Heat transfer loss is commonly caused by slime exuded by bacteria. This slime will collect debris that acts as an insulator, leading to heat loss. The chemicals exuded by the bacteria can lead to corrosion and can pit the metal. The bacterial matrix has also been implicated in scale formation caused by adhesion of particle to the slime mass.

So How is this Challenge Overcome?

Biocides should be used on a regular basis and once again can be administered by a controller. When trying to add biocides manually, there are too many variables that need to be recognized, and it becomes more challenging to keep a regular schedule. The biocides will not completely kill all the microorganisms in the system but they significantly reduce them. By keeping the biocide at an adequate residual for a specified contact time, microorganisms can be kept under control, resulting in infection becoming increasingly unlikely.  Biocides are required to have a specific concentration over a defined contact time in order to achieve the necessary kill rate. Biocides will need to be added between two and three times a week.

First, the system is allowed to pre-bleed in order to lower the conductivity in order to prevent scaling when the bleed-off is closed.  Next, the controller will add a dispersant to penetrate the slime or attached bacteria and then add a biocide in the pre-calculated dosage in less than one hour.  Finally, the bleed-off is closed to ensure that the proper concentration level of biocide is in the system.

As previously stated, Valin recommends Walchem’s W600 Series Controller.  This model provides some of the industry’s most reliable, flexible and powerful control for a water treatment program.  The model includes a large touchscreen display with icon-based programming – making setup very easy.  Due to the universal sensor input, the controller is very flexible, allowing the user to utilize the same controller with almost any type of sensor needed.  The on-screen graphing of sensor values and control output status, along with its Ethernet option for remote access via the Internet or LAN, make controlling a water treatment program even more seamless. This allows companies to more efficiently realized cost savings through conservation of both water and electricity.