A semiconductor manufacturer of wafer handling machines and wet benches was looking for a way to reduce the engineering hours spent on writing code. Semiconductor companies are commonly required by their customers to be SECS/GEM compliant and this can be a laborious and costly task. SECS/GEM is a communication protocol or ‘language’ that is used in semiconductor fabrication units to communicate between the host and different machines. Traditionally, SECS/GEM protocol consists of three main components: a controller that stores logic, a PC that translates the logic to SECS/GEM, and a host that receives information from the translator. The translator, or middleware, generally consists of special software, a text written code that requires hundreds of engineering hours, additional PC hardware, and an annual licensing fee. This is both a costly and time consuming endeavor for semiconductor OEM’s. Furthermore, OEM’s and end users must be aware of updates in PC operating systems as it will affect the middleware and require coding rework.

Valin introduced the customer to Omron’s NJ PLC with SECS/GEM protocol as a solution to their laborious and costly task of integrating SECS/GEM. The NJ is capable of both storing logic from I/O as well as acting as the translator for the host, thus eliminating the middleware software, hardware, and licensing fees. Furthermore, it has built in function blocks that make it easy for programmers. This reduces the engineering hours that are spent writing code in a text language such as C. It also has a PLC platform that eliminates the need to update operating systems and mitigates the risk of potential viruses. 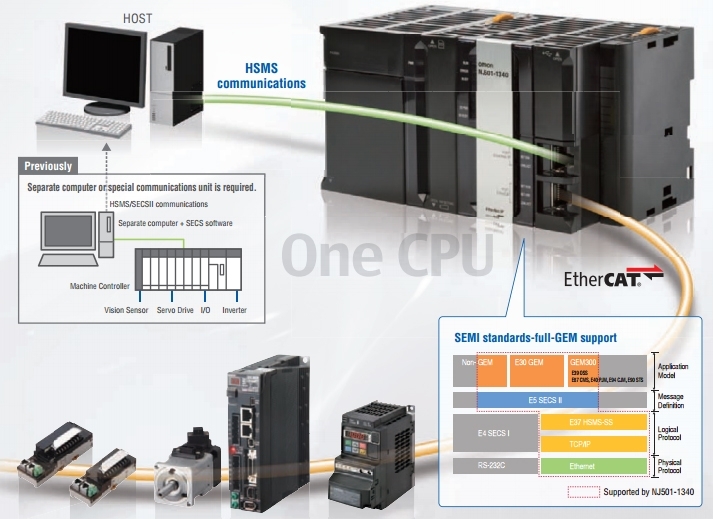 Valin provided onsite training and programming assistance in three areas: Human Machine Interface Development, SECS-GEM Configurator Training, and the Sysmac Automation Software Suite. We took receipt of the customer’s old code and wire-frame and trained them how to replicate it in the newer SECS-GEM compliant hardware. Lastly, we aided in the complete overhaul of the wiring and electrical layout by providing detailed schematics, pin-outs and control topology maps for the hardware upgrade.

The customer was so enthralled with Omron’s revolutionary advances in technology that they not only chose to eliminate their current middleware, but also replaced their current PLC platform with Omron’s platform solution that includes not only the NJ PLC, but also NX I/O, and NA HMI. The lead programmer called the technology “a game changer” as it will save him hundreds of hours programming and reprogramming for SECS/GEM. The customer is extremely happy that Valin was not only able to reduce their cost for hardware, engineering, and eliminate their obligatory annual licensing fee, but that we were able to provide onsite training as well. The estimated savings per machine is stated to be a minimum of $30,000, allowing them to be much more competitive on their wet-bench products.