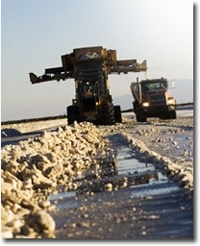 A major chemical processing company in Ogden, Utah had an expansion project that required two tanks to be maintained at 170F.  One tank contained a lightweight oil and the other a thick, viscous F300 oil.

Both oils arrive by railcar at 400F and are offloaded into holding tanks.  These tanks need to be kept at 170F via recirculating pumps.  The oil is combined with bonding agents and solids creating slurry that is sprayed on roads to keep down dust and contaminate particles.

One of Valin’s process heating specialists visited the customer and they discussed the application in detail.  The customer had hired an engineering firm and they had recommended an in-line immersion heater with a high watt density.  After reviewing the MSDS of the F300, Valin’s heating specialist had serious doubts about the elements coking and prematurely failing.  We arranged
several conference calls between the customer, the engineering firm and Valin.  Eventually we settled on an NWHO style at 2.5 watts/ sq. in.  The customer was impressed with Valin’s thoroughness and attention to detail and didn’t even put the project out to bid.

At the onset of the project, we discussed heat tracing the recirculation lines and were told they were going to be steam traced.  As a result of the relations formed during the specification of the in-line heater, we were able to convince them to use electric heat trace on those lines.  Each tank had 500 ft of piping and a panel.

When we mentioned that the offload lines from the railcar also needed to be traced, they didn’t even question the suggestion.  We created a quote and received an order same day.  The project manager told me that he was very impressed with how responsive and knowledgeable we were and that Valin was now his go-to heater resource.