Chlorine dioxide is a powerful oxidant used in pre-treatment of drinking water for reduced trihalomethanes, as an oxidizing agent for contaminated water used in oil drilling, as a sanitizer in vegetable and fruit washing, as a biocide in cooling towers and its largest market the bleaching of pulp for paper. Chlorine dioxide is 2.5 times as powerful an oxidizer as chlorine and does not have the problems associated with pH dependence.

Chlorine dioxide is a very unstable compound and highly reactive, so typically it is made by generators placed on site. These generators will use 2 to 3 chemicals in a combined reaction to produce chlorine dioxide and dissolve it into a stream of water. The chemicals that are generally used are sodium chlorite and hydrochloric acid, however in some systems sodium hypochlorite may be added along with the other chemicals for the required reactions.

Walchem's W900 system used for chlorine dioxide generation consists of the controller, chemical pumps to pump the necessary chemicals into the reaction chamber, flowmeters, Posiflows to verify that the chemicals are pumping and to shut down the system when any chemical pump loses prime. Usually a solenoid valve is placed on the water supply and a pH sensor may be used to monitor the reaction pH and call for the addition of more acid. The W900 can also have a chlorine dioxide sensor to monitor the residual in the process water. The fact that datalogs and remote communications are available can greatly enhance the reliability and control aspects of liability in the system. The W900 controller is simple to program and requires no licensing fees or programmers and has the added advantage of the configuration file which may be loaded very simply to each successive system.

The W900 controller could also be used solely in the process where chlorine dioxide is being added. Even though an existing generator may be in place, the desire to monitor the process can be accomplished very simply and at a very reasonable cost.

Another scenario not to be overlooked is the possibility of web enabling the existing chlorine dioxide generators with W600 for online monitoring and troubleshooting of the manufacturer’s systems. A monitoring contract by the manufacturer may be a viable revenue stream during these tough economic times.

How/where to find similar companies/situations: There are several chlorine dioxide generator manufacturers that can be found on the Web. There are also many end users where chlorine dioxide is being used particularly in the municipalities for the reduction of THMs and hydrogen sulfide and the other markets previously mentioned. 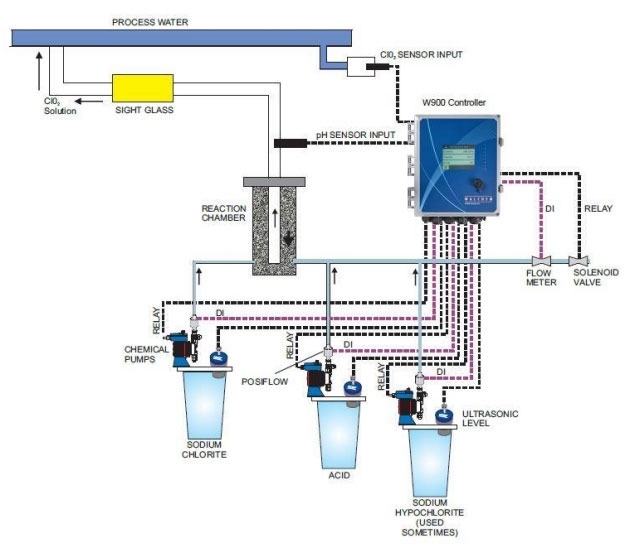