Skip to main content123
Share on
Home Resources Articles Which Motors Are the Best: Servos or Steppers?

Which Motors Are the Best: Servos or Steppers?

Submitted by John Brokaw || Valin Corporation
on Wed, 05/08/2019
One of the more critical decisions engineers can make when designing any type of motion control process is choosing the motor. Getting the right motor, both in terms of type and size, is imperative to the final machine’s operational efficiency. Furthermore, ensuring the motor won’t break the budget is always a primary concern.

One of the first questions to answer in making the decision is: Which type of motor would be best? Does the application require a high-performance servo motor? Would a low-cost stepper be better? Or maybe there’s a third, middle-of-the road option to consider?

The answers start with the needs of the specific application. There are many factors to address before determining the type of motor that would be ideal for any given application. 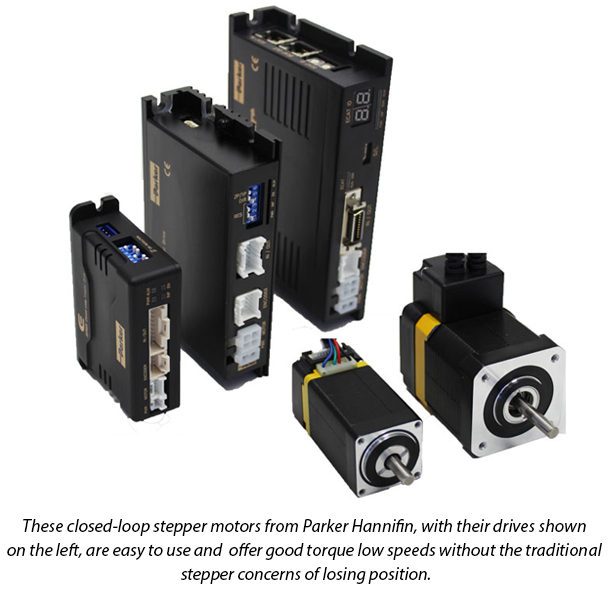 How many cycles per minute does the motor need to make? How much torque is needed? What is the peak speed required?

These critical questions cannot be addressed simply by choosing a motor with a given horsepower.

The power output of a motor is the combination of torque and speed which can be calculated by a multiplication of speed, torque and a constant.

Due to the nature of this calculation, however, there are many different combinations of torque and speed that will yield a specific power output. Thus, different motors with similar power ratings can operate differently due to the combination of speed and torque they offer. 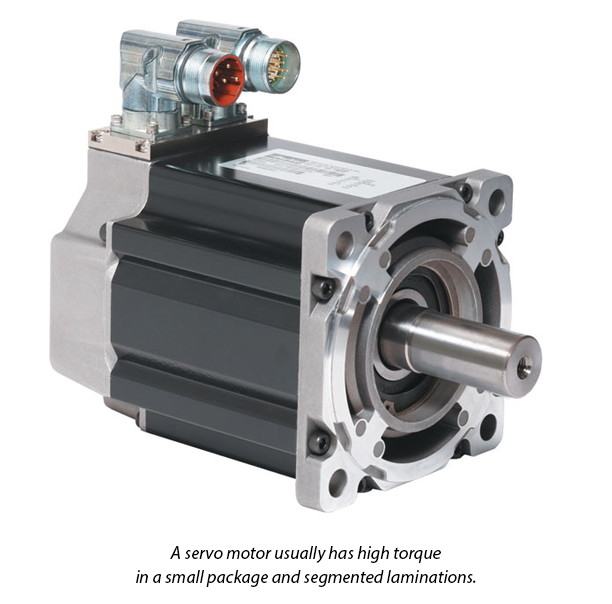 Engineers must know how fast a certain size load needs to move before confidently choosing a motor that will work best. The job being performed must also fall under the motor’s torque/speed curve. This curve shows how a motor’s torque varies during operation. Using “worst case” assumptions (in other words, what is the maximum/minimum amount of torque and speed the job will require), engineers can be confident a chosen motor has a sufficient torque/speed curve.

The inertia of the load is another factor that should be addressed before diving into the decision-making process of choosing a motor. The inertia ratio must be calculated, which is the comparison between the load’s inertia and the motor’s inertia. One rule of thumb says that if the load’s inertia exceeds 10 times that of the rotor, then tuning the motor may be more difficult and performance can suffer. But this rule varies not only from technology to technology, but from supplier to supplier and even product to product. How critical an application is will also affect this decision. Some products handle up to 30-to-1 ratios, while direct drives run at up to 200-to-1.  Many people don’t like sizing a motor that exceeds a 10-to-1 ratio.

Finally, are there physical limitations that restrict one certain motor over another. Motors come in different shapes and sizes. In some instances, motors are large and bulky, and there are certain operations that cannot house a certain size motor. Before an informed decision can be made on the best type of motor, these physical specifications should be recognized and understood.

Once engineers answer all these questions - speed, torque, horsepower, load inertia and physical limitations - they can zero in on the most efficient size of motor. However, the decision-making process does not stop there. Engineers must also figure out what type of motor best fits the application. For years, the choice on type boiled down to one of two options for most applications: a servo motor or an open-loop stepper motor. 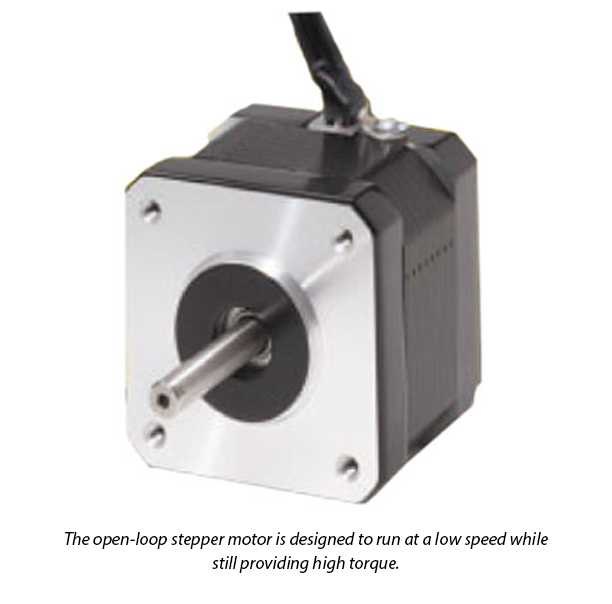 The operating principles for servo and open-loop stepper motors are similar. However, there are key differences between the two that engineers must understand before deciding which motor is ideal for a given application.

In traditional servo systems, a controller sends commands to the motor’s drive via pulse and direction or an analog command related to position, speed, or torque. Some controls may use a bus-based method, which in the newest controls is typically an ethernet-based communication method. The drive then sends appropriate current to each phase of the motor. Motor feedback circles back to the motor’s drive and, if needed, the controller. The drive relies on this information to properly commutate the motor and to send good information about the motor shaft‘s dynamic position. So, servo motors are considered closed-loop motors and contain built-in encoders, and positional data is frequently fed to the controller. This feedback gives the controller more control over the motor. The controller can make adjustments, in varying degrees, to operations if something is not running the way it should be. This type of crucial information is a benefit open-loop stepper motors cannot offer.

Stepper motors also operate on commands sent to the motor’s drive to dictate distance moved and velocity. Typically, this signal is a step-and-direction command. However, open-loop steppers cannot provide feedback to operators, so their controls cannot properly assess a situation and make adjustments to improve the motor’s operation.

For example, if a motor’s torque isn’t enough to handle the load, the motor can stall or miss certain steps. When this happens, the target position will not be hit. With the open-loop characteristics of the stepper motor in mind, this inaccurate positioning will not be adequately relayed back to the controller so it can make adjustments.

The servo motor seems to have clear advantages in terms of efficiency and performance, so why would someone choose to a stepper motor? There are a couple of reasons. The most common one is price. Operational budgets are important considerations in making any design decision. As budgets tighten, decisions must be made to cut unnecessary costs. Not only does this refer to the cost of the motor itself, but routine and emergency maintenance tends to be less expensive for stepper motors as opposed to servos. So, if the benefits of a servo motor will not justify its costs, a standard stepper motor may be sufficient. 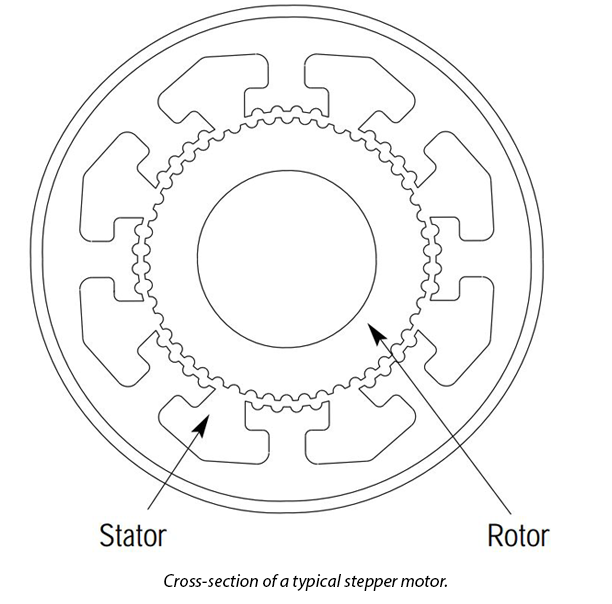 From a purely operational standpoint, stepper motors are also notoriously easier to use than standard servo motors. Operating a stepper motor is much simpler to understand and easier to configure. Most personnel would agree that if there is no reason to over-complicate operations, keep it simple.

The advantages offered by the two different motor types are very different. Servo motors are ideal if you need a motor with high speed over 3000 RPM and high torque. However, for an application that requires only low speeds below a few hundred RPM, a servo motor is not always the best choice. Servo motors may be overkill for low-speed applications.

Low-speed applications are where stepper motors shine as the best possible solution. Stepper motors are not only repeatable when it comes to stopping, they are also designed to run at a low-speed while providing high torque. By nature of this design, stepper motors can be controlled and run up to their velocity limits. The velocity limit of typical stepper motors is usually under 1,000 rpm, whereas servo motors can have rated speeds up to 3,000 rpm and higher, sometimes even over 7,000 rpm.

If a stepper is sized correctly, it can be the perfect choice. However, when a stepper motor is running on an open loop configuration and something goes wrong, operators may not get all of the data they need to fix the problem. 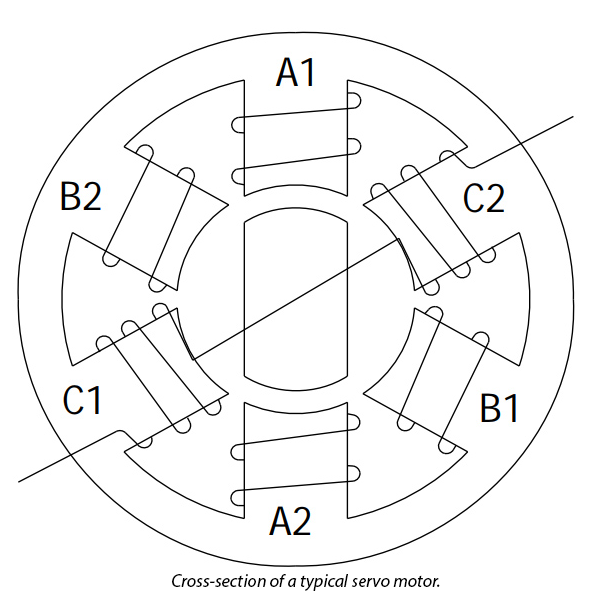 Over the last few decades, there have been several different approaches offered to solve the traditional problems with open-loop steppers. Homing the motor to a sensor on power-up, or even several times during an application, was one method. Although simple, this slows operations and doesn’t capture problems that arise during the normal operating processes.

Adding feedback to detect if the motor is stalling or out of position is another approach. Engineers at motion control companies created “stall detection” and “position maintenance” features. There have even been a few approaches going even further that treat stepper motors much like servos, or at least mimic them with fancy algorithms.

In the grand spectrum of motors – in between servos and open-loop stepper motors – lies a somewhat new technology known as the closed-loop stepper motor. It is the best and most cost-conscious way to solve the problem of applications that require positional accuracy and low speeds. By applying high-resolution feedback devices to close the loop, engineers can enjoy the “best of both worlds.”

Closed-loop stepper motors offer all the advantages of stepper motors: easy to use, simple, the ability to run consistently in low speeds and with accurate stopping. Plus, they still offer the feedback capabilities servo motors do. Luckily, it does not have to come with a servo’s largest disadvantage: the larger price tag.

The key has always been in the way open-loop stepper motors work. They typically have two coils, sometimes five, with a magnetic balancing act going on between them. Movement disturbs this balance, causing the motor’s shaft to fall behind electrically, but the operator cannot know how far behind it falls. The stopping point is repeatable for open-loop steppers but not for all loads. Putting an encoder on the stepper and making it a closed-loop provides some dynamic control. This lets operators stop on an exact spot under varying loads.

These benefits from using closed-loop stepper motors for certain applications have sharply increased the popularity of these motors in the motion-control community. Specifically, in two of the more prominent industries, semiconductor and medical device manufacturers, there is a clear increase in using closed-loop stepper motors. Engineers in these industries must know exactly where motors have positioned loads or actuators whether it powers a belt or ball screw. The closed-loop feedback in these steppers lets them know exactly where it is. These steppers can also provide better performance than servos at lower speeds.

Generally, any application that needs guaranteed performance at a lower cost than a servo motor and the ability to run at relatively low speeds is a good candidate for closed-loop stepper motors.