Jon F. Monsen, Ph.D., P.E., is a control valve technology specialist, with more than 30 years' experience. He has lectured nationally and internationally on the subjects of control valve application and sizing, and is the author of the chapter on "Computerized Control Valve Sizing" in the ISA Practical Guides book on Control Valves.
In a recent interview with VALVE Magazine, Dr. Monsen discussed how the analysis of installed gain can be a guideline for selecting the control valve that will provide good control with stability throughout the full range of required flow rates. While it is difficult to compare the control capability of two valves with less than perfectly linear installed characteristics simply by studying their installed characteristic graphs, by examining their installed gain, you can better determine how well they will control a particular system.
He explained that "a control valve has two characteristics: an inherent characteristic and an installed characteristic. The inherent characteristic is the one that valve manufacturers publish based on testing in a system where great care is taken to ensure that the pressure drop across the test valve remains constant. This is the relationship between valve opening and flow capacity for the valve alone, ignoring any system effects. 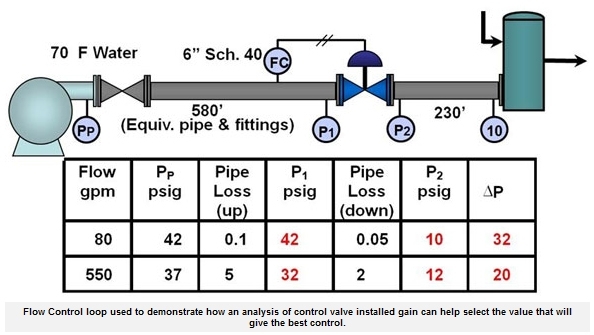 "However, the majority of control valves are installed in systems that include a significant amount of pipe and other pressure-consuming elements such as fittings, isolation valves, heat exchangers, etc. That system will have an effect on the control valve, resulting in its installed characteristic... how it operates in that installation, for that application."
Monsen explains that by using installed gain analysis, you can determine if the gain is too low or too high. If the gain is too low, when the valve moves the flow hardly changes, which means the valve will not be effective in controlling flow. If the gain is too high, small errors in valve position will result in large errors in flow, making it difficult or impossible to control accurately.
Using Installed Gain Analysis to Choose Valves
"When choosing the control valve, first you must compare different sizes of valves. Properly sized globe valves tend to be one size smaller, others are two sizes smaller than the line they're in. Then you have to consider what style to use," said Monsen.
For example: For a valve in the 10-inch range, a lot of people would say that a segment ball valve would be better than a high-performance butterfly valve. "But the butterfly valves are a lot less expensive than a segment ball valve. By considering the installed gain, you may be able to satisfy yourself that the butterfly valve will give satisfactory control for nearly half the price of a segment ball valve."
He continued: "You don't want to just cross your fingers. The installed gain will give you a real window on how well that valve will control. Ideally, you want that information before you buy the valve and install the system."
The challenge is to be able to make that calculation, and, according to Monsen, software is the best way to get an installed gain graph. "It can be done manually but it is very tedious," he said. "To my knowledge, there are three software systems you can use to do this."
One is from Neles. "Metso Automation (Neles and Jamesbury) make their Nelprof control valve sizing and selection software available to their customers," he said. "Besides including the installed gain graphing, the Metso program allows sizing generic valves based on included Cv tables for typical valves."
Emerson Process Management also has software that calculates and graphs valve installed gain. It is a value-added service for Emerson customers. There is also one comprehensive commercial program available, Conval from F.I.R.S.T. GmbH.
Monsen said it's very important for people to learn more about analyzing gain. "More and more of the people who understand control valve applications are retiring," he said, "and those who are doing the systems don't really understand them."
Monsen summarized the case for using installed gain to analyze a system for optimum control valve pressure drop. "It allows you to base the design on a graphical interpretation of system behavior and controllability rather than having to rely on rules of thumb or the judgment of others who may not fully understand the requirements for good control."