Submitted by Jim Slama || Valin Corporation
on Thu, 03/08/2018
Controlling vibration and surge is one of the most critical aspects of keeping centrifugal and reciprocating compressors up and running. If improperly monitored and maintained, these types of compressors can experience frequent functional issues and ultimately shorten their life span. 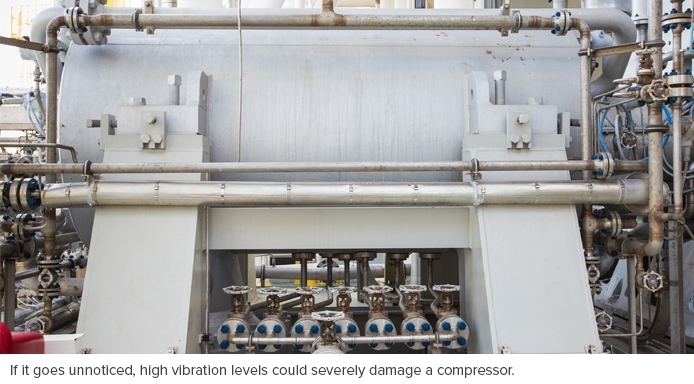 Vibration controls are essential concerning any kind of rotating equipment, and compressors are no exception. Regarding reciprocating compressors, typically the vibration sensing is not all that sophisticated. One will generally see a velocity measuring device, transmitting in inches per second, mounted to the block of a reciprocating compressor. As the vibration increases, the velocity of that vi- bration is going to increase along with it. This signal is then fed into a PLC or another comparable device. The signal is compared with a set of predetermined points. In the industry, these points are referred to as the “high” and the “high high.” An alarm is set to go off on the “high” to warn the operator that the vibration is starting to exceed a velocity that is recommended. If the vibration does not level off or slow down, the “high high” point will be triggered, which is programmed to shut down the compressor so it does not cause any irreversible damage.

What are some problems that can lead to uncharacteristically high vibration in a reciprocating compressor?

A common cause for high vibration is a bad bearing. If a bearing is going out, it does not perform the task it needs to and will ultimately need to be replaced. Another common cause for high vibration is mechanical fasteners that have come loose or were improperly torqued. For example, there is a mine setting where someone fails to tighten valves properly on cylinder heads of a reciprocating compressor. Over time, these valves can vibrate loose. However, if proper vibration controls are implemented in a situation such as this, protections are put in place. Although a high-vibration shutdown can be costly, it is ultimately less expensive than completely replacing the compressor, and can protect operations personnel from a dangerous situation in their plant.

How does the velocity sensing work for a vibration control system in reciprocating compressors?

The signal produced by the velocity measuring device is sent to a signal conditioning device that generates a 4-20 milliamp signal fed into a machine monitor or the plant monitoring system. The alarm shutdown is then programmed into the machine PLC or the plant’s distributed control system (DCS). Alternatively, the signal conditioning device could have a contact closure. This needs to be configured for an alarm and a shutdown level. This will, in turn, have a contact closure on the back. The contact closure sends a signal to the plant DCS or the machine’s overall control system, letting the system know it needs to shut down.

What about centrifugal compressors?

Centrifugal compressors are a little different in how they are controlled. Typically, one sees more high-end vibration monitoring systems installed on centrifugal compressors. For reciprocating compressors, the approach outlined above is effective. However, for centrifugal compressors, there is more rotation/potential vibration at work. Equipment can be spinning at 10,000-plus rpms in a centrifugal compressor. Consequently, bearings and vibration monitoring on these compressors is crucial. If there is uncharacteristically high vibration in this situation, it needs to be caught and addressed or it will potentially destroy the entire machine. With centrifugal compressors, instead of monitoring velocity in inches per second, there are probes (x,y) called proximeters. These measure the distance from the tip of the probe to the shaft. Instead of technically measuring “vibration,” the proximeter probes act as a distance-sensing device. Additionally, there is a keyphasor, which monitors and provides a voltage pulse on a once-per-turn-event. These three signals (the x, the y and the keyphasor) are fed into a signal conditioning box located near the machine, roughly 20 to 30 feet away. The proximeter probes sense inductance. Placed at each end of the shaft, the proximeter probes measure the radial location of the shaft. The rotor on the compressor may shift radially, causing major problems. When everything is running properly, the center of the shaft will stay centered consistently as its running. Once up to speed, the shaft will develop a high-pressure film on the bearing. At this point, there can be liftoff and the shaft will suddenly be rotating inside the journal bearing on a thin film of oil (1/10 of a millimeter). The proximeter probes can measure gaps down to 1/100 of a millimeter or even less. A good practice to avoid too much trouble with high vibration inside of centrifugal compressors is to make sure that the lubrication system is operating properly.

The signal conditioning unit, which monitors and analyzes the proximeter probes, will generate a signal to a central machine monitoring system. Each individual model can be set with a specific “high” alarm and a “high high” shutdown, just as described with the reciprocal compressors.

Other than vibration, what is another type of critical control?

For centrifugal compressors, controlling surge is a critical component. Surge occurs when there is no forward flow of gas through the compressor and a reversal of flow occurs. The gas that is being compressed gets pushed backward through the centrifugal compressor. When this surge (flow reversal) occurs, which can happen in milliseconds, the rotor is affected. It will shift to one end in its normal running position. Then it will slam backward, and in many cases, the thrust bearing in that op- posite thrust situation cannot handle this because it is sized smaller than the main thrust bearing, often due to cost. Additionally, the dry gas seals are slammed into and with the tolerances being merely a few ten thousandths of an inch, they can be severely damaged. Needless to say, surge should be avoided and thus, anti-surge controls were created.