Recently, the author published an article that included detailed instructions for constructing a Microsoft Excel worksheet (www.control-valveapplication-tools.com) that generates installed flow and gain graphs in conjunction with valve sizing calculations made with any valve sizing application. This makes it practical for anyone to incorporate graphing installed flow and gain into their valve selection process (reference 4).

This article explains how to use control valve installed gain calculations.

Figure 1 is an example of a properly sized valve compared to an oversized valve. One valve manufacturer suggests the following gain criteria for installed gain within the specified flow range:

Extremely low gains are undesirable, because a low gain means when the valve moves, the flow does not change by much. It might not be as obvious why high gains are undesirable. An audio amplifier with a high gain may be desirable. But control valves are mechanical devices, and parts that move while in contact with each other tend to stick when not moving. If a valve, because it tends to stick when not moving, can only be positioned within 2 percent of the desired position and has a gain of 4, the flow can only be adjusted within 8 percent steps, which may not be desirable. The reason for limiting the gain change within the required flow range to 2:1 is so it will be easier to tune the controller for stable and fast response throughout the required flow range.

To calculate and graph the installed flow and gain using the reference 4 worksheet, the process model and the worksheet require the following information about the process:

Figure 1. Control valve installed flow and installed gain characteristics comparing a properly sized 3-inch valve and an oversized 6-inch valve in the same system. Emphasis is added to show the portion of the graphs that fall within the user’s specified flow range between minimum and maximum required flow of 80 to 550 gpm.


The values of P1 and P2 at the minimum and maximum design flow need to be obtained by an analysis of the frictional pressure losses and static pressure changes in the system upstream and downstream of the control valve (references 5–6).

Reference 4 prompted several inquiries as to what applications would be candidates for installed flow and gain graph analysis. Below are some of the most common. 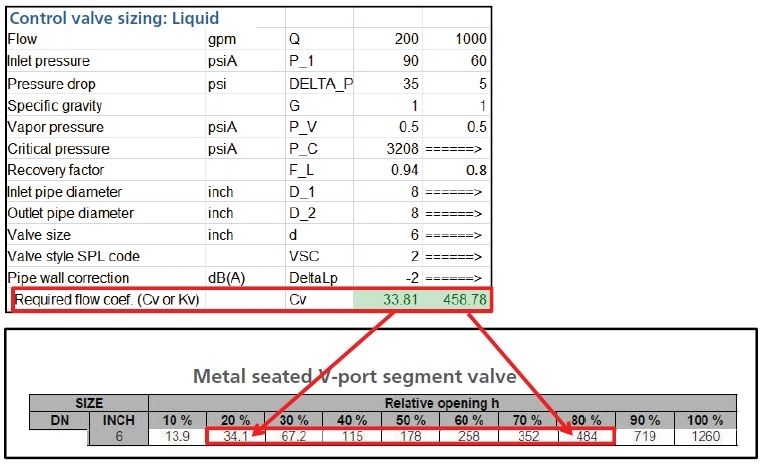 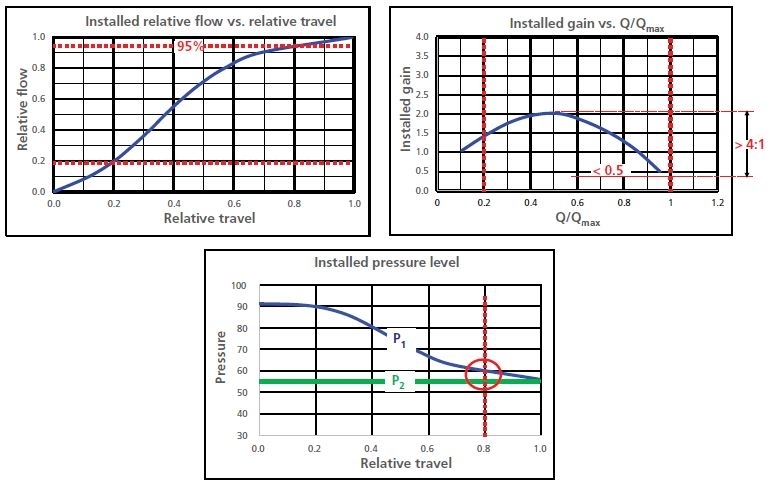 Figure 3. Installed characteristics of the valve proposed in figure 2.

Figure 2 shows a user’s Excel control valve-sizing worksheet. The calculated CV range appears to show a 6-inch segment ball control valve would be operating at about 20 percent to 78 percent open from the minimum design flow to the maximum design flow. An installed flow and gain calculation yielded surprising results (figure 3).

At about 60 percent travel (relative travel of 0.6), the installed flow graph starts rounding off to a much shallower slope. This fact is identified on the installed gain graph where the installed gain drops to below 0.5, emphasizing the fact that changes in valve position would have only a small effect on flow in the system. The gain change from the maximum design flow (Q/Qmax) and the maximum gain on the graph is greater than 4:1, making it difficult to tune the controller for fast and stable control. It turned out the problem lies with the user’s pump choice.

Reference 4 does not include the ability to graph what is happening to P1 and P2, and thus the pressure differential available to the valve. However, the reference 4 worksheet has a tabulation of P1 and P2, so constructing a graph of P1 and P2 versus relative valve travel was simple. In the installed pressure level graph, as valve relative travel approaches 0.8 (80 percent valve travel), the pressure drop available to the valve decreases rapidly.

The user found a pump with a slightly higher and flatter head curve. A new analysis of the upstream system gave the revised values of P1 and DELTA P shown in red in figure 4. Putting these new values of P1 and DELTA P into the user’s valve-sizing program and into the reference 4 worksheet gives the graphs of figure 4. The valve is now operating between 25 percent and 75 percent travel. The maximum design flow is now at slightly less than 80 percent of the fully open flow, giving ample safety factor at the high end of the range. The installed gain graph is much flatter and well within the suggested limits. 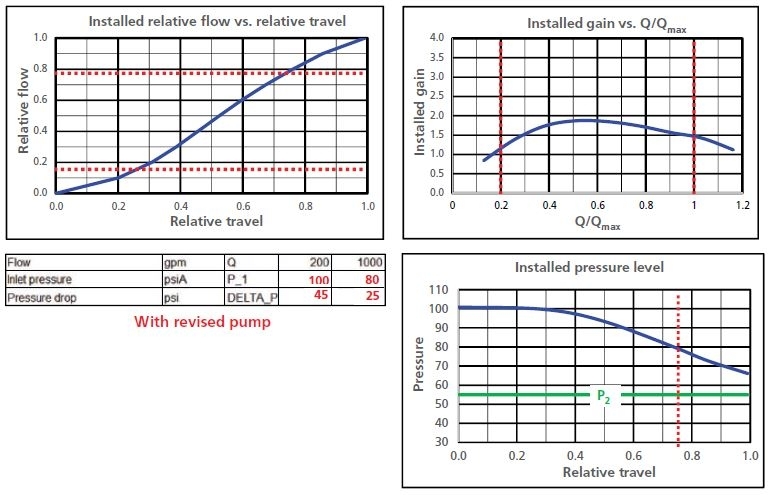 Figure 4. Installed characteristics of the valve with the revised figure 2 pump pressures shown in red. 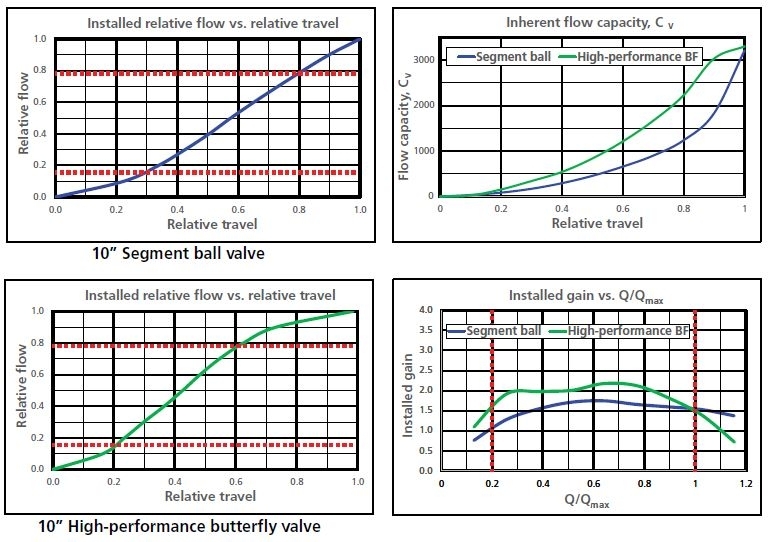 Figure 5. Comparison of a segment ball valve and a high-performance butterfly valve in the same system. The installed gain of both valves is plotted on a single graph.

Figure 5 is based on an application where the system designer recommended a 10-inch segment ball valve after examining the installed flow and gain graphs and determining the segment valve was a good choice. The purchasing agent commented that a 10-inch high-performance butterfly valve would cost approximately one-third less than the segment ball valve. The system designer agreed to investigate the applicability of a high-performance butterfly valve, knowing the two valve styles have quite different inherent flow characteristics. Segment ball valves tend to have a nearly perfect equal percentage characteristic. High-performance butterfly valves tend to have an inherent flow characteristic between linear and equal percentage.

The upper right graph in figure 5 compares the inherent flow characteristics of the two valves being considered. The installed characteristics are linear between the design minimum and maximum flows. The installed gain of each valve meets the suggested gain limits between the minimum and maximum design flows. The gain of the segment valve is slightly closer to 1.0. The maximum gain change of the butterfly valve is 1.4:1, where the maximum gain change of the segment valve is 1.6:1. In this system, either valve would likely control satisfactorily. In a system with different valve pressure drop versus flow characteristics, this might not be the case.

To demonstrate how this can be done, three possible pumps for the system shown in figure 6 will be considered, and the one that allows satisfactory controllability while minimizing energy consumption will be selected. Curves of P1, the pressure just upstream of the valve, are shown for each of the three pumps, along with the power required by each at a normal flow rate of 400 gpm. These curves slope downward in proportion to the flow squared from the 100 gpm pump head (45, 60, and 75 psig, respectively, for pumps A, B, and C) to a pressure 10 psi lower due to the combined effect of the 5 psi pressure loss in the upstream piping and the 5 psi decrease in pump head from 100 gpm to 600 gpm stated in the figure. The curve for P2, the pressure at the control valve outlet, starts with the 10 psig static head of the tank at very low flows and increases in proportion to the flow squared to 30 psig as the downstream piping and heat exchanger pressure losses increase to their 600 gpm values. 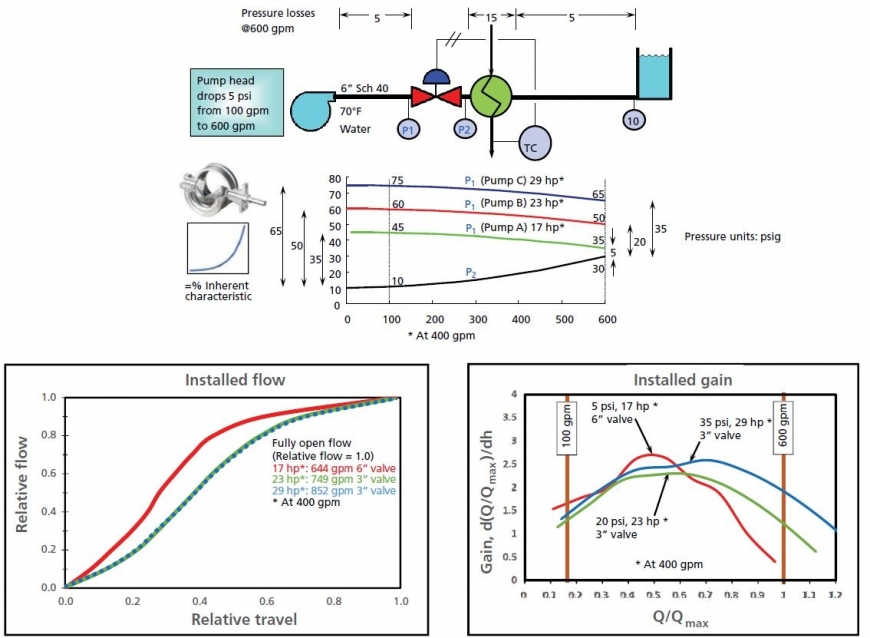 The control valve pressure drops (the difference between P1 and P2) are indicated in the figure by the arrows at the left side of the figure for 100 gpm and at the right side of the figure for 600 gpm. The analysis is performed based on using a segment ball valve. The graph in the lower left of figure 6 shows the calculated installed flow characteristics. Keep in mind the installed flow graphs generated by the worksheet of the reference 4 graph is relative flow, so 1.0 is 100 percent of the fully open flow, which is different for each of the three cases. What is interesting is the installed gain graphs.

With the 17-hp pump, besides requiring a more expensive 6-inch valve, the gain graph looks terrible. The installed gain is the highest of the three (meaning a larger flow error for the same valve position error), it drops to 0.4 as it approaches the maximum design flow (the red vertical line at 1.0 on the Q/Qmax scale), and the variation in gain over the flow range is almost 7:1, much greater than the recommendation of 2:1. This is large enough that it would be difficult to come up with proportional-integral-derivative (PID) tuning parameters that would provide good and stable control over the entire required flow range. The gain graphs of the 23-hp and 29-hp pumps fall within the recommended gain criteria, but the 23-hp pump is the winner, because its gain is closer to 1.0, and it also is the more economical of the two to operate.