Submitted by Jon Monsen Ph.D., PE // Flow Control Network Magazine
on Wed, 06/17/2015
Selecting a properly sized control valve is essential to achieving the highest degree of process control. Today, the control valve sizing calculations are usually performed using a computer program. Most manufacturers of control valves offer control valve sizing software at no cost, though most are specific to that manufacturer’s valves only. One specific program includes a number of generic valves to choose from. The generic choices include typical equal percentage globe valves, linear globe valves, ball valves, eccentric rotary plug valves, high-performance butterfly valves and segment ball valves. These generic selections permit the user to investigate the applicability of different valve styles and sizes to a particular application, without showing a preference to a particular valve manufacturer. Additionally, there is a set of comprehensive Excel spreadsheets that follow the methods of ANSI/ISA-75.01.01 (IEC 60534-2-1 Mod)-20012 Flow Equations for Sizing Control Valves that are available at no cost at www.control-valve-application-tools.com. These spreadsheets are applicable to the valves of all manufacturers and are documented so the user can trace the calculations to the equations in the Standard. This article presents a brief review of some of the elements that must be considered to size and select the right control valve for a particular application.

The choice of control valve style (e.g., globe, ball, segment ball, butterfly, etc.) is often based on tradition or plant preference. For example, a majority of the control valves in pulp and paper mills are usually ball or segmented ball valves. Petroleum refineries traditionally use a high percentage of globe valves, although the concern over fugitive emissions has caused some users to look to rotary valves because it is often easier to obtain a long lasting stem seal. Globe valves offer the widest range of options for flow characteristic, pressure, temperature, noise and cavitation reduction. Globe valves also tend to be the most expensive. Segment ball valves tend to have a higher rangeability and nearly twice the flow capacity of comparably sized globe valves and, in addition, are less expensive than globe valves. However, segment ball valves are limited in availability for extremes of temperature and pressure and are more prone to noise and cavitation problems than globe valves. High performance butterfly valves are even less expensive than ball valves, especially in larger sizes (8” and larger). They also have less rangeability than ball valves and are more prone to cavitation. The eccentric rotary plug valve (a generic term commonly applied to valves with trade names like Camflex®, a registered trademark of Dresser Masoneilan, and Finetrol®,a registered trademark of Metso Automation) combines features of rotary valves, such as high cycle life stem seals and compact construction with the rugged construction of globe valves. Unlike the other rotary valves, which have a flow capacity approximately double that of globe valves, the flow capacity of eccentric rotary plug valves is on a par with globe valves.

Certainly the selection of a valve style is highly subjective. In the absence of a clear-cut plant preference, the following approach is recommended to select a control valve style for applications where the valve will be 6” or smaller. Considering pressure, pressure differential, temperature, required flow characteristic, cavitation and noise, one must first determine whether a segment ball valve will work. If a segment ball valve is not suitable, select a globe valve. Keep in mind that cage-guided globe valves are not suitable for dirty service. For applications where the valve will be 8” or larger, it is encouraged to first investigate the applicability of a high-performance butterfly valve because of the potential for significant savings in cost and weight.

Control valves are generally installed into piping that is larger than the valve itself. To accommodate the smaller valve, it is necessary to attach pipe reducers. Because the control valve size is usually not known at the time the pressure drop available to the control valve is being calculated, it is common practice to not include the reducers in the piping pressure loss calculations. Instead, the pressure loss in the reducers is handled as part of the valve sizing process by the inclusion of a “Piping Geometry Factor,” F­P. All of the modern computer programs for control valve sizing include the F­P calculation. Because F­P is a function of the unknown Cv, an iterative solution is required.

A valve sizing calculation will only be reliable if the process data used in the calculation accurately represents the true process. There are two areas where unreliable data enters the picture. The first involves the addition of safety factors to the design flow rate. The second involves the selection of the sizing pressure drop, DP. There is nothing wrong with judiciously applying a safety factor to the design flow. A problem can arise, however, if several people are involved in the design of a system, and each adds a safety factor without realizing that the others have done the same.

Perhaps the most misunderstood area of control valve sizing is the selection of the pressure drop, DP, to use in the sizing calculation. The DP cannot be arbitrarily specified without regard for the actual system into which the valve will be installed. What must be kept in mind is that all of the components of the system except for the control valve (e.g., pipe, fittings, isolation valves, heat exchangers, etc.) are fixed and at the flow rate required by the system (e.g., to cool a hot chemical to a specified temperature, maintain a specified level in a tank), the pressure loss in each of these elements is also fixed. Only the control valve is variable, and it is connected to an automatic control system. The control system will adjust the control valve to whatever position is necessary to establish the required flow (and thus achieve the specified temperature, tank level, etc.). At this point, the portion of the overall system pressure differential (the difference between the pressure at the beginning of the system and at the end of the system) that is not being consumed by the fixed elements must appear across the control valve.

The correct procedure for determining the pressure drop across a control valve in a system that is being designed is as follows:
There are some situations where the user can have a hand in determining the pressure drop across the control valve. A typical situation of this sort is a pumped system where the user knows the required pressure at the end of the system and is in a position to select the pump. A procedure that often gives an optimum control valve pressure drop involves calculating the dynamic pressure losses in all of the fixed elements of the system at the design flow rate. The drop in the pump head curve from zero flow to the design flow should be included with the dynamic pressure losses. For a good balance of economics and control performance, add a pressure drop equaling one-half the dynamic losses for the control valve. After adding this total to the required pressure at the end of the system and any changes in elevation head, select a pump that matches the required pressure as closely as possible. Because you will probably have to select a pump that does not exactly match the calculated required pressure, you will want to recalculate the actual valve sizing DP as described in the preceding paragraph. Designing in a pressure drop for a control valve of significantly less than one-half the other dynamic losses is likely to result in a system that does not control well. Designing in a valve pressure drop that is significantly higher will result in unnecessarily high pumping energy and may introduce noise and cavitation problems.

Liquid choked flow in control valves results in either flashing, or more often, cavitation. It is necessary to avoid this because cavitation in a control valve is almost sure to result in high noise levels and rapid, severe damage to the valve. The classical approach to explaining choked flow is by assuming that flow increases linearly with the square root of pressure drop, ΔP, until ΔP reaches the coked pressure drop, DP choked , and then immediately becomes fully choked with no further increase in flow. (See the dashed lines in Figure 2.) This is also the way flow vs. the square root of pressure drop is presented in the ISA/IEC control valve sizing standards. 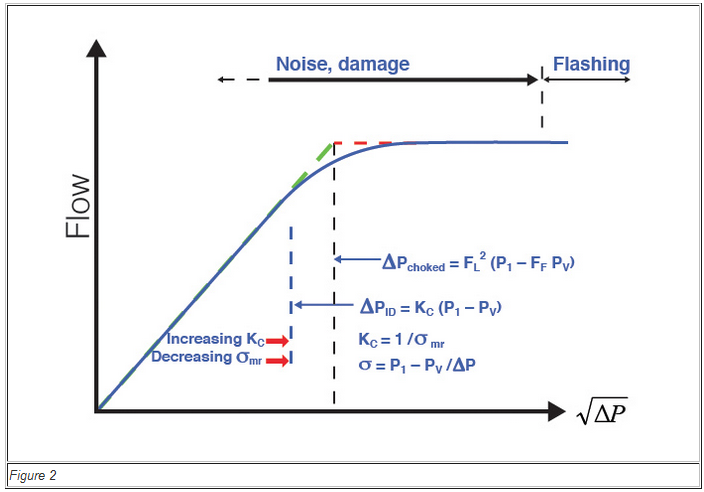 In reality, there is a certain amount of rounding out of the graph at the DP choked point as shown in Figure 2. This rounding of the flow curve makes predicting cavitation damage more complicated than simply comparing the actual pressure drop with the calculatedchoked pressure drop, which assumes the classical discussion of a sudden transition between non choked flow and choked flow. It turns out that both noise and damage can begin even before the pressure drop reaches DPchoked. Over the years, what this article refers to as DP choked has gone by many names because it was never given a name in the ISA/IEC control valve standards. With the issuance of the 2012 Standard, for the first time it has been officially named “DP choked.”

Some valve manufacturers predict the beginning of cavitation damage by defining an incipient damage pressure drop, which is sometimes referred to as ΔPID, as shown in the formula in Figure 2. These manufacturers evaluate actual application experience with cavitation damage and assign what they believe to be meaningful values of KC to their valves. One manufacturer, for example, uses a KC for stem-guided globe valves that is equal to 0.7. There are other manufacturers who, based on the recommended practice, ISA–RP75.23–1995, use sigma (s) to represent various levels of cavitation. These valve manufacturers publish values of either smr (the manufacturers recommended value of sigma) or sdamage. Sigma is defined as “(P1 – PV)/ ΔP.” smr and KC are reciprocals of each other and thus convey the same information. Higher values of KC move the point of incipient damage closer to DP choked, where lower values of smr do the same.

A good method for predicting cavitation damage is based on the fact that the same element that causes damage also causes the noise, namely the collapse of vapor bubbles. The idea of correlating noise with cavitation damage got its start in 1985. Hans Baumann published an article in Chemical Engineering magazine where, based on some limited damage tests, he established a maximum sound pressure level, SPL, of 85 dBA as the upper limit to avoid unacceptable levels of cavitation damage in butterfly valves.

To verify this premise, the valve manufacturer that the author was associated with for many years did a study of many applications. In some cases, cavitation damage was minimal, and in others it was excessive. The conclusion of the study was that it is possible to predict that damage will be within acceptable limits as long as the predicted noise level is below limits established in the study. In the case of 4” and 6" valves, the limit turns out to be 85 dBA. The SPL limits established in the study (based on noise calculations using VDMA 24422 1979), to avoid cavitation damage are: Up to 3” valve size: 80 dBA; 4” to 6”: 85 dBA; 8” to 14”: 90 dBA; and 16” and larger: 95 dBA. Note that regardless of the noise calculation, the actual pressure drop must be less than the choked pressure drop, because experience has shown that operating above the choked pressure drop is almost certain to result in damage.

It should be noted that although choked flow with gas does not cause valve damage, gas choked flow can result in high noise levels, but these will be revealed by any of the valve sizing programs. Many authorities warn against aerodynamic noise levels above 120 dBA (calculated with Schedule 40 pipe) due to the resultant high levels of vibration within the valve.