Submitted by Cromwell Schubarth, Featured in Silicon Valley Business Journal
on Tue, 11/06/2012
To diversify Valin®'s business one acquisition at a time, it took the skills of an M&A M.D. named Joe Nettemeyer 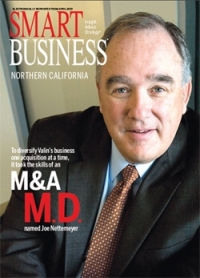 It could be a deal. It could be a business strategy. It could even be a house. Whatever the project, Joe Nettemeyer is all about making it bigger, better and more successful. "I had a boss tell me once that I was not a person that he would put into a business to sustain it," says Nettemeyer, CEO of Valin® Corp. "He'd always put me into something that he wanted to build because I couldn't help but start trying to re-engineer anything I wanted to get my hands on. Building something is an ongoing challenge, but the results give you a huge amount of satisfaction."
A builder was exactly what Valin® Corp. needed when Nettemeyer joined the industrial solutions business in 2001. Despite years of great success in the semiconductor capital equipment business, Valin® has been a fast casualty of the computer-chip industry downturn. With a whopping 90 percent of its revenue coming from chip manufacturing, the company's revenue plummeted by two-thirds in six months.
"Everything crashed, equipment owners crashed, and we went from being a $75 million business to a $25 million business in about 120 days," Nettemeyer says. "We didn't lose market share; it's just that the slides of the market opportunity dramatically contracted."
As Valin®'s new CEO, Nettemeyer realized the 38-year-old chip manufacturer had two options: Continue in the same direction and fall apart or rebuild as a much more diverse business. Here's how he transformed the floundering company into one of the nation's fastest-growing businesses.
Shake off complacency
With such a large percentage of Valin®'s income tied to shrinking revenue streams, Nettemeyer looked for ways to create new sources of income - and quickly. Acquisitions would allow the company to efficiently diversify its portfolio and grow new business lines.
When I came in, I realized that we had such a great dependency on too few accounts," Nettemeyer says. "It was such a huge risk. We had to move into acquisitions. So right in the midst of that turmoil I went out and started borrowing money and buying businesses."
Not everyone was as excited as Nettemeyer about diversification. "Experimentation brings rewards and risks that make people uncomfortable," Nettemeyer says. "It was challenging for people because they were in a comfort zone. They'd done extraordinarily well for 20 years doing what they were doing, and we were pushing them outside of it."
In the past, Valin® focused on small diameter process management, working on quarter-inch or half-inch tubing. Suddenly, the company was working with up to 60-inch pipe.
Recognizing that he was asking people to make some big changes, Nettemeyer made sure that he and the leadership team were transparent and thorough when they laid out the acquisition strategy to employees. 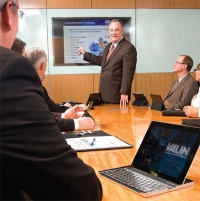 "I walked the management team through a plan, and we talked about how we could integrate these different technologies and provide solutions versus just selling parts and pieces," he says. "There was a lot of communication. I selected all the individuals that I felt were key leaders and we had monthly leadership meetings. We reviewed where we were at, and we had an open book approach to financials. We were measuring the initiatives that we were undertaking. Through that 24-month real crucial period, we were giving monthly feedback."
Employees appreciated the fact that Nettemeyer didn't sugarcoat the changes. "I wasn't going to pretend that this would all pass," he says. "There was a core group that really came together and embraced what we had to do."