Submitted on Mon, 01/27/2020
As identified by the IATA SAP Task Force, there have been a number of aircraft events where Super Absorbent Polymer (SAP) has been confirmed by relevant authorities as having been the cause of operability issues for aircraft operators. Consequently, engine and airframe OEMs consider the presence of SAP in fuel to be a potential flight safety issue and cannot endorse any level of SAP that is acceptable in aviation fuels. All filter monitor manufacturers and SAP manufacturers have confirmed that it is not possible to guarantee that no SAP will pass downstream of filter monitor elements when in service.

Presented with these facts, the Energy Institute has published EI Bulletin 17/074 Rev. 1 announcing they will withdraw the EI 1583 filter monitor specification as of the end of 2020. As such, a decision was made, with the support of JIG, A4A, IATA and other relevant bodies, that all absorbent SAP elements be removed from service by end of 2020. However, due to protracted testing and lack of an approved drop in solution at this time, A4A (bulletin A4A 2019.1) and JIG (Technical Newsletter TN5) have permitted extended use of filter monitors. No time frame has been endorsed but considering the number of fueling vehicles worldwide (estimated at more than 30,000) this will be challenging.

Parker Velcon, in the spirit of providing a seamless transition away from SAP elements, proceeded with development of a ‘drop in’ solution that maintains the performance requirements of SAP monitor elements ‘without SAP’ as a component. The CDFX™ Barrier Technology was developed to meet this requirement and Parker Velcon worked closely with EI and relevant aviation partners to assist in the development of a new specification: EI 1588. The first edition was published in May of 2018.

Previously, technologies such as coalescers and microfilters were required only to undergo EI witnessed testing and ‘qualification’ under laboratory conditions prior to field evaluation or, possibly, direct sales to market. As the Barrier Technology is a new concept, it was deemed necessary to ensure that this technology was safe and fit for purpose prior to introduction to into-plane operations. 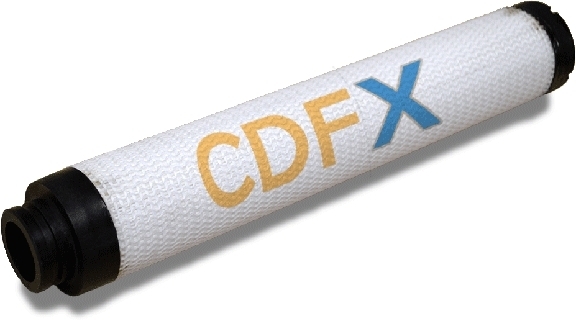 The Road To Date 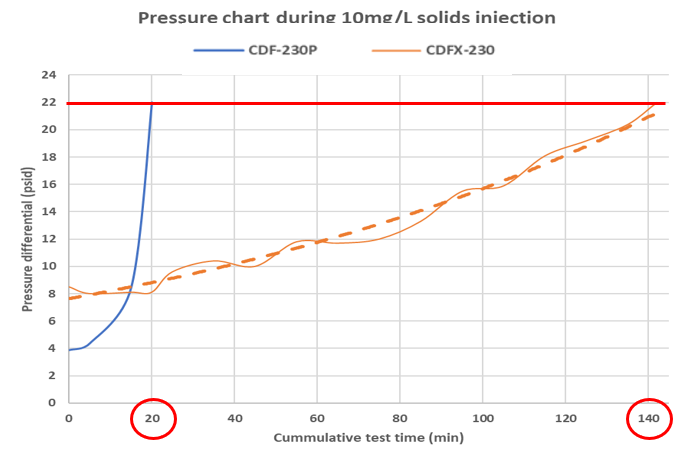 The in-house qualification testing to EI 1588 and Phase I Robustness Testing surpassed all criteria and expectations of said specification.

In laboratory conditions, the life expectancy (solids holding capacity) per CDFX™ element exceeded its CDF counterpart by as much as six (6) times.

The water removal performance (effluent quality) was consistently less than 2 ppm, the specification requirement being less than 15 ppm.

After reaching the designated changeout differential pressure (DP) the elements were returned to our laboratory for EI witnessed testing in order to assess their condition and ability to meet water removal and mechanical integrity requirements. The elements performed exceptionally and did not exhibit any degradation of quality or efficiency.

However, as noted in the Phase II Robustness Testing, the elements did reach terminal DP of 22 psid prior to meeting the projected throughput.  This reduced life expectancy is being evaluated to identify the source. It was deemed important to establish the source and to ensure that the ‘Barrier Technology’ was not removing additives or compounds essential to jet fuel properties.

Parker Velcon has retained outside experts at the University of Dayton Research Institute (UDRI) to identify the source of the DP rise.

To date, the investigation shows no adverse effect on the fuel chemistry. If confirmed, then there should be no objection to into plane field trials.

The Parker Velcon CDFX™ is the ONLY ‘true drop-in’ solution available that can remove both dirt and water without the need for additional equipment and/or electronic sensors (as currently with EI 1581 and EI 1583). We believe that evaluating the CDFX™ in an into-plane fueling environment is the only approach to best determine its life expectancy.

In a safety-driven industry, customers can make their own evaluation based on actual field trials and subsequent reports from the various organizations and committees monitoring these tests.

In an uncertain and fluid situation, Parker Velcon will be able to provide the CDFX™ as a seamless and safe solution to ease the concerns and needs of the aviation community worldwide.