Submitted by Jon Monsen, Ph.D.
Selecting a valve with the correct flow characteristic (the relationship between valve opening and flow capacity) can be as important as the selection of the valve size. Actually, a control valve has two characteristics, an inherent characteristic and an installed characteristic. 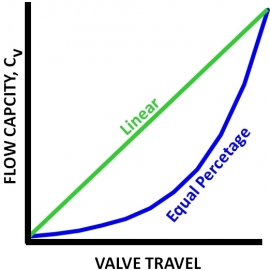 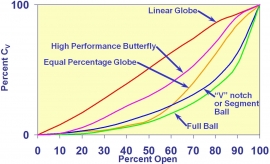 Most control systems give the best performance when they behave in a linear manner. In light of this fact, the question might be asked, “why the equal percentage valve?” which is not at all linear. The answer is because of the installed characteristic. The installed characteristic is the relationship between valve position and flow in the specific system being considered, taking into account any changes in the pressure differential available to the control valve due to the approximately flow squared relationship between flow and piping pressure losses and/or a centrifugal pump head curve.

A large percentage of process systems include a significant amount of pipe and a number of fittings (elbows, Tee’s, isolation valves, etc.) resulting in a relationship between flow in the system and pressure drop available to the control valve similar to Figure 3. 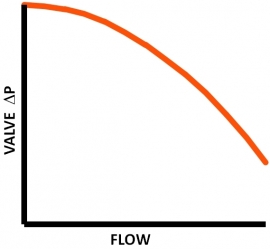 Figure 3. Valve pressure drop vs. flow in a typical system with a significant amount of pipe. 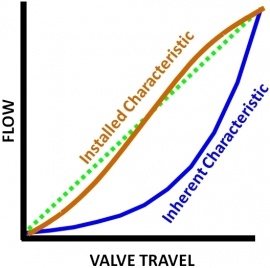 Figure 4. Installed characteristic of an equal percentage valve in the system of Figure 3.

At least one control valve sizing computer program that is available can graph the actual installed flow characteristic based on the valve manufacturer’s published inherent characteristic and user input actual process conditions.

Here are links to white papers that may be of interest: